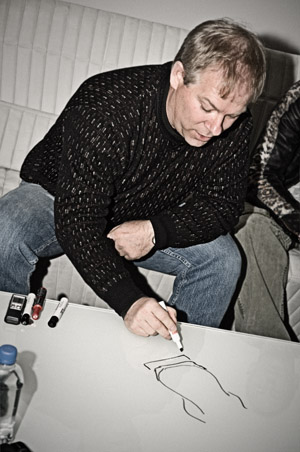 If you trace things back far enough, the history of the modern athletic shoe started with a single phone call. The call came from a design employment agency in New York, informing of a job opening in Exeter, NH, with a company called Blue Ribbon Sports. The call’s recipient was a young industrial designer named Bruce Kilgore.

Kilgore had arrived in industrial design via the fine arts—a sculptor, he changed his career path when a helpful professor informed him that if he wanted to do things like pay the rent and eat, sculpting probably wasn’t the way to go. He changed majors and schools, transferring to the University of Bridgeport.

limited to the New England area. After graduation, he went on to design household appliances. “That was interesting,” he says. “but figuring out how juice cans can come out of a freezer gets a little bit old after a while.”

After that, the car companies came calling. He moved to Detroit, did some work on the K-Car for Chrysler, as well as sculpting for a Pontiac “skunkworks” project that would eventually become the Fiero. Still, when that phone call came, he was ready for a change. He went in for the interview—a rather informal process—found out that Blue Ribbon Sports manufactured Nike shoes, and took the job. Afterward, they all went out to Pizza Hut, the only restaurant in Exeter that was still open.

Kilgore was teamed up with Jeff Johnson, Nike’s first employee, working on track spikes. Old Bill Bowerman had some ideas about spike placement, represented by a folder full of annotated foot X-rays. Kilgore’s job was to get the spike plate positioned properly. The result, the Zoom series of track spikes, were what Carl Lewis wore in the 1984 Olympic Games. “Then,” Kilgore says, “my next project was this Air basketball shoe.”

Nike had first used an Air sole in the Tailwind, a 1979 running shoe. That was an immediate success. The basketball project wasn’t. “There was another designer,” Kilgore says, “but it wasn’t moving in a positive direction. The shoe as I recalled it looked like the Michelin Man. They were really poochy, and the sidewalls…it wasn’t something that you could play basketball in. You could stick an airsole in it and say yes, it’s got a basketball silhouette, but to be able to play a game in the shoe, it wasn’t that. So I kind of took that project over.”

The result was the Nike Air Force 1, the granddaddy of all modern basketball shoes and one of the most iconic designs of all time. Kilgore may have left sculpting, but he still designed something that would endure. Not that he sees it that way. “I generally take a very minimalistic approach to everything. It’s only what you need. If you don’t need it, don’t put it in the product.”

“My nature is to focus on the performance aspect and let that define what the aesthetics of the shoe will be. Once you’ve done that, there’s some refinement that you have to do, you’re gonna make the thing look as aesthetically pleasing as you can, but for me the form follows function. So I start there, I get the base of it done, and when I know I have a product that works, then I can start detailing off and finishing it.”

Now Nike’s Director of Advanced Research and Development, Kilgore went on to design other forward-thinking products like the Air Jordan II, the Sock Racer and the Air Pressure (which, while remembered for its clunky air bladder, introduced the concept of a lower-profile midsole to basketball). Kilgore also spent a long time working on a little project named Shox. “Shox,” he laughs. “I spent 17 years screwing around with that.”

One thing he hasn’t done is looked back. Even as the revolutionary Air Force 1 turned 25 back in 2007, even as it was lauded and celebrated by everyone from athletes to entertainers. “Once you’ve done the product, I tend to move on. I’ve got a lot of other things on my plate,” he says. “I’m not good at looking at myself, actually. In fact, I try and play it down, probably.”