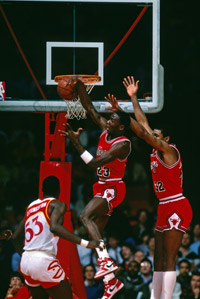 of basketball sneakers are produced, issued, sold and played in on the hardwood worldwide, and for every year in the NBA, at least one star player has a special season that is the peak of his career—and a signature shoe that shares in his glory. Michael Jordan is the sole reason for the popularity of athletic shoes in the past quarter-century and just about every year was a landmark season. In honor of MJ’s induction into the Naismith Basketball Hall of Fame, the Sneak Peak series will be highlighting the peak seasons and signature shoes that Air Jordan made legendary.

Nobody knew he was gonna be what he became. Nobody really knew it. Third pick overall to a group of red-and-black losers seemed pretty good. He was better than Barkley and Smoove. Pre-draft rumors of being only 6-4 from then-L.A. Laker coach Pat Riley (he was actually 6-6 3/4—that’s right, MJ is actually 6-7) were mere poppycock. Yeah, he was a First-Team NCAA All-American—and? He shot the rock too much, right? Didn’t have a consistent J, either? At least he was explosive… but he wasn’t Bird, he wasn’t Magic, and he may not be Isiah-level, and nobody’s more Southside than Isiah. They were winners, and league champions, too; there wasn’t going to be any Dean Smiths to hold young Mike’s hand, but then that was the genius of the M. Jeffery Jordan. He was ready to shake up the cup.

Michael’s rookie season was merely the first of many great individual years of his brilliance, and the first-year numbers spoke for themselves after he won just about every major collegiate award a player could win as a North Carolina Tar Heel—NBA Rookie of the Year, All-NBA Second Team, All-Rookie First Team, all while ranking as one of the top 10 leaders in 12 different statistical categories (ranking first in games played and overall points scored), but the numbers themselves don’t tell the entire story of the G.O.A.T.’s dominance.

Remember Dwyane Wade’s comeback year from injuries in ‘08-09? Jordan’s average games were Wade’s best games, comparatively. No. 23 literally dominated on and off the dribble, penetrating defenses and exploding to the basket for dunks that Kobe only wishes he had the athleticism to fully execute. 28.2 points, 6.5 rebounds, 5.9 assists with a .515 field goal percentage in ‘84-85 just didn’t narrate enough

Hold up…what about those shoes?

Oh man, those shoes were a doozy. Never mind that they were a “signature” shoe made up of a Nike Big Nike, a Nike Dunk and an Air Force 1—these had Air, man! The colorblocking of black and red with that stark white sidewall made for a classic beyond initial comprehension, especially when paired with the custom Nike warm-up suit. A modest traction pattern of concentric circles and stars, a high-cut upper and a padded collar were good enough to “give ‘em that work” (as DeAngelo Hall has boasted of doing to the prep school J.J. Redick), but even the look in and of itself isn’t enough to show the big picture. The NBA doesn’t ban your shoe unless it believes it’s tearing the fabric of conformity, and the Swoosh made sure that paying a per-game fine of $5,000 would ensure that snagging of the tightly knit cloth of the status quo.

(It didn’t hurt that Isiah was gnashing those bright white teeth of his during that ’85 All-Star Weekend, with MJ going Tarzan on the rim with those gold chains dangling in the air—kelly green looked especially terrible on Pistons No. 11.)

Michael ended up playing with that shoe for his second season, after breaking his foot in the ’85 offseason. No one thought he’d come back for that year, and the Chicago Bulls of ’85-86 just plain sucked, but in came the Black Cat. Playing only the last 18 regular season games and starting only seven of them, a recuperating and healing Jordan still averaged 22.7 ppg, but made his name in the ’86 Playoffs.

As a number, 43.7 may not mean a lot out of context, but let the records show that Michael Jeffrey average

d nearly 44 ppg in those very Playoffs (along with about 6 rebounds and nearly 6 assists as well), in same black-toe Air Jordan Is that were kicked out again as “Old Love” in 2008. For further exclamation, a 63-point game against the eventual NBA champion Celtics within a three-game, first round sweep allowed him to ascend into semi-heavenly realms when Bird shockingly called him “God.”

That Michael spent took those first two League years and made for a revolutionary run onto other seemingly impossible goals like corporate takeover of the free market and a mild run at literal world domination in the money game shouldn’t be all that surprising in retrospect—after all, if you share the namesake of the Most High, it’s to be expected.

Twenty-four years and some recent “School Daze” and “Do The Right Thing” trips to Spike Lee’s Nike closet, and we’re left with the singular phrase rolling through our minds…