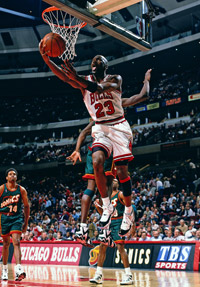 Every year, hundreds of

basketball sneakers are produced, issued, sold and played in on the hardwood worldwide, and for every year in the NBA, at least one star player has a special season that is the peak of his career—and a signature shoe that shares in his glory. Michael Jordan is the sole reason for the popularity of athletic shoes in the past quarter-century and just about every year was a landmark season. In honor of MJ’s induction into the Naismith Basketball Hall of Fame, the Sneak Peak series will be highlighting the peak seasons and signature shoes that Air Jordan made legendary.

What are your memories?

I came back home to my grandma’s house from my clan’s ancestral house of worship that Sunday and immediately turned on the game. I saw the Indiana Pacers and the Chicago Bulls playing in that undeniable shade of rouge on NBC. MJJ missed a shot and headed to the sidelines for a breather.

“See, I knew I shouldn’t have went to stupid church!” I exclaimed.

“Boy, don’t you say that about church!”, said Mom.

I quickly apologized and made a curved turn to my grandma’s little room. Word broke out that a fax machine produced a cryptic, but hopeful two-word compilation of words.

The ’94-95 season was a season of many things and occurrences in the A. Dark electric blue uniforms for the Orlando Magic; black duds for the Phoenix Suns. The breakout came for Anfernee Hardaway, and Nike’s Air Flight series was reaching an apex of classic proportions. Jason Kidd and Grant Hill became future Hall of Fame (?) rookie triple-double threats.

Oh yeah, and Michael Jeffrey Jordan came back to the Chicago Bulls.

With the 4-5 humbly adored his back and abdomen and jogging to the tune of 26.9 ppg, Air Jordan was finding his balance, his new balance (no pun intended), as he hadn’t gone sky high in nearly two years and his beloved Chicago Stadium was no more. There was a double-nickel at Madison Square Garden, a game-winner against the Atlanta Hawks, and the Air Flight Ones he wore to pay respect to a rising heir to the Jordan throne, but the 1995 Eastern Conference Semifinals became mythic.

The United Center, May ’95… Game 3. (Or Game 4? I was only XI years old myself.) The crowd roared and a familiar No. 23 came forth. The Black Cat walked, and slapped a palm’s full of talc in Johnny Kerr’s face, as was customary.
“What are those shoes?!” I asked my young brother Danny, only 8, as we both gazed into the Panasonic television our grandma bought—a Christmas present from 2 1/2 years earlier.

“What is that shiny stuff around those?!”

“Are the bottoms of those shoes clear?!”

We stood with our mouths open for five minutes, and watched that game start to end looking at those shoes. We used the TV timeouts and halftime segment to dunk on the Nerf hoop that hung above our bedroom entryway. He was fined for that game twice—once for not receiving league approval for his game uniform number change, and another up top of that for his shoes’ color blocking not complying with that of his other teammates.

He was Michael Jackson that night. A smooth criminal with basketball spats for sure.

The Chicago Bulls would lose that series in six games, as MJ played another away game against the Finals-bound Magic in the black/white-varsity royal shoes that are incorrectly known as the “Space Jam” XIs (and I’ve got the basketball card to prove it—they should be called the Nike Air Jordan XI “Orlando”).

White/black-concord dominated the home games. It dominated the road games. Cat brought out the white/white-Carolina Blue joints for a February night in San Antonio. Black/white-varsity red came with the black socks for the final 15 wins.

Jordan made the world believe again. That warm-up interval in early ’95 wasn’t the real MJ. That MJ wasn’t jumping. He wasn’t shooting that unstoppable, patented fadeaway J ™. A game-winner on Steve Smith in a few weeks after a re-emergence wasn’t going to convince everyone.

A loss to Toronto here, a loss to Charlotte there (the last 10th loss of the Bulls’ season, at the end of the regular season, no less), everyone was going to forgive those.

That fadeaway was legit, though. Unblockable and out to 18 feet was the new Kareem dream for the next crop of young ballers.

Yet and still, those XIs were dreamy. An upper composed of ballistic mesh draped with a full 360-degree patent leather rand, sitting atop a full-length Phylon midsole with a woven full-length carbon fiber plate. Of course, he needed the Air-sole to cover every single square inch of those feet (12 1/2 on one foot, a size 13 on the other). A translucent gum rubber bottom.

What are your memories?

I remember the ’95 Orlando game, I remember every single home game of the ’96 season, and the TBS, TNT and NBC games (cue John Tesh).

I remember seeing Michael face off against the rookie Jerry Stackhouse at the Spectrum—the “Next Jordan”, he was thought to be, at 6-6 playing guard and forward, while he was dunking and publicly talking trash about how he’d be eager to face off against the master (I then recall Jordan humiliating Stack on national television and generally making him look like a young, lost boy on-court.)

I remember seeing the young AI dominate the Big East in those patent leather Concords back when Georgetown rocked Kente cloth side panels in the uniforms, and Nike actually made jerseys that resembled traditional cuts.

r gleamed from behind the television glass, and the Swoosh showed amidst a screen of black.

I once walked into Foot Locker on a Saturday in early ’96, and was both mesmerized and heartbroken that my family didn’t have the money to pay for the All-Star XIs—I walked out of that store dispirited and silently mourned. I looked back and saw the same Nike Georgetown jersey with Allen’s number on it, just below those Jordans. I nearly cried in sadness out of viewing the sheer beauty and my own inability to acquire those lovelies.

I remember MJ took a basketball in June 1996, leapt up and down in the air, ran into the home locker room, and cried his eyes out on the carpet floor. He came back with a cigar-in-mouth, a cartoonish cap, and four fingers up and waving in the air. Then he poked up another finger with the four.

I witnessed possibly the most career-defining season ever played in by the game’s greatest player…and was lucky enough to see the shoes that broke the mold of the modern sled.

My memories haven’t failed me. Nope, not one bit.