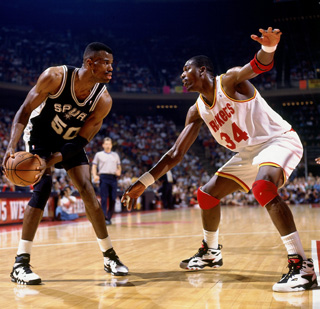 1994-1995, the season of glory and mayhem of David Robinson. The San Antonio Spurs center had made south Texas “Mr. Robinson’s Neighborhood” and no one was going to get in his way. Not the Seattle SuperSonics, not the Phoenix Suns, not the Denver Nuggets, not the Hous-…well, hmmm. Approaching 30 years of age and dominating the League, it was only proper to wear a shoe that dominated the hardwood; only something appropriate by the Sw

Though unfairly criticized for being removed from championship contention by the flawless Hakeem Olajuwon and his Houston Rockets, The Admiral had what looked to be his most complete season individually and as a team leader for the Spurs. ’94-95 was a season that bestowed upon Mr. Robinson a league Most Valuable Player award, an All-Star selection, a place on both the All-Defensive and All-NBA First Teams, and a host of other earned honors (those being ranked in the top 10 in blocks per game and total blocks in a season, rebounds per game and total rebounds, points per game and total points, total steals, free throws attempted and free throws made, field goals attempted and field goals made, as well as total minutes played). Simply, No. 50 was at the absolute height of his career and play. With a 62-20 record, the Spurs were largely a cut above the rest, despite the brilliance and idiosyncrasies of fellow star player Dennis Rodman. The Dream Shake and the karmically positive Rockets ended what was poised to be the manifest destiny league dominance for San Antonio, though The Admiral’s feet were plenty prepared for the preferred ending.

The Nike Air 2 Strong was the sneaker of choice for the 7-1, 250-pound pivotman from the Naval Academy. One of the premier shoes from Nike’s Force line, the Air 2 Strong was in actuality a mid-cut basketball shoe with a built-in high ankle wrap. Possessing the visibly large Max Air pocket in the heel, a non-visible Air pocket in the forefoot of the shoe and reinforced eyelets, the Air 2 Strong was probably the best shoe that No. 50 could’ve ever worn up until that point. The attached ankle wrap, composed of foam and leather and reinforced by an adjustable ankle inversion strap, gave Mr. Robinson the advantage of having a great amount of support that was not a part of the leather build of the sneaker itself (perfect for a guy whose skill set and overall athleticism would’ve allowed for him to play small forward at his height). Though the shoe was wide-set, the durability of the polyurethane midsole and all-rubber outsole and the leather of the upper allowed for some flexibility and versatility on the court.

The popularity of the shoe was extremely strong and was so reliable in its performance that it was sold in a 3/4-cut widely in retail sneaker stores and chains. Dubbed simply the Nike Air Strong, it was a shoe that was famous in middle schools (Roosevelt Teddies, holla!), high schools and colleges (famously, the white/Carolina blue colorways that were trod in by the North Carolina Tar Heels). Like the original Air Force 1, the Nike Air Strong was a shoe that gave considerable foot customization as you wore it–basically, it molded to the shape of your feet, which was another plus for players.

The Nike Air Strong never returned with an official third version, but the Force line has continued to move forward, eventually giving way to another classic shoe that The Admiral shared with the greatest power forward in NBA history, his teammate Tim Duncan, with the Nike Air Foamposite Max. And while on the subject of Robinson, though he failed to add the exclamation that wa

s so sorely sought out in his lone MVP season, the addition of Duncan and Gregg Popovich as the head coach allowed the center to fall back in a pseudo-complimentary role and win two league championships before retiring in 2003 and then being inducted into the Naismith Hall of Fame in the summer of 2009.

Robinson nor the Air 2 Strong received the attention or the credit that they truly merited in their heydays, but when you think about either, most likely you’re bound to remember them as reliable, capable and winners all around.

Sandy Dover is a novelist/writer, artist, fitness enthusiast, as well as an unrepentant Prince fan (for real). You can find Sandy frequently here at SLAMonline, as well as at Associated Content and Twitter.