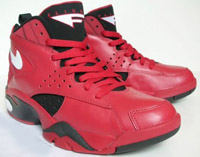 Every year, hundreds of basketball sneakers are produced, issued, sold and played in on the hardwood worldwide. And at least one star NBA player has a special season at peak of his career, and a signature shoe shares his glory. That’s what Sneak Peak is about—highlighting players and their sneakers from the past 25 years who shared the spotlight with iconic play and iconic style.

The ‘lost season’ is memorialized in many ways.

It was when the G.O.A.T. spent his time toiling in baseball mediocrity, away from the newly built United Center. It was the season Anfernee Hardaway became the league’s shiny Penny. The year Chris Webber wrapped a basketball around his waist and dunked on Sir Charles. The year the Houston Rockets took NBA glory while the bison of the Second City were left utterly defeated by a pack of blue-and-orange Knickerbockers.

The season was ‘93-94. It was the year of Pip and the breakout of the Nike Air Maestro.

In the absence of the Black Cat, Pippen took the former Jordanaires, placed them upon his broad, angular shoulders, laced up his Nikes and took off to take over the League. In what was to become his strongest season without MJ, Pip went about the ’94 season like a man on a mission, averaging a career-high 22.0 points, 8.7 rebounds and 2.9 steals per game.

Pip led the Bulls in points, rebounds, assists, steals and blocks, doing the vast majority of his work in the basic black/white and white/black Air Maestro colorways for his home and away games. While the long-armed swingman (long thought to be the first NBA player to literally swing between guard and forward on a consistent basis) is reme

mbered as a whiner when then-rookie Toni Kukoc was drawn up for a last-second game winner instead of Pippen himself, he nearly led the Bulls to the Finals, save for the referees’ ‘brilliance’ (*cough mistakes cough*) in the 1994 Eastern Conference Semifinals against the New York Knicks.

While the 6-7… 8-ish… 9-ish guard/forward (former coach Doug Collins swears Pippen is two or three inches taller than him—Collins is 6-7) was having the year of his life, his shoes took on another life. While using a primarily low-key color scheme, the Air Maestro got white-hot for the MVP candidate. Utilizing a seemingly-simple visible Air cushioning package, a high-cut upper and Huarache-like panels, the Air Maestro was the de facto sneaker of choice for many a hoophead, and things only got more interesting in the annual All-Star Weekend.

Voted on as an NBA All-Star for the fourth time of his career, Pippen made the most of his experience, tallying 29 points on 60 percent shooting, connecting on 5-9 three-pointers and winning All-Star MVP. Most fans don’t remember his point total or the fact that he muscled down 11 rebounds in the affair—no, Pip saw to it that everyone would know he was wearing all-red Maestros. Setting him apart in function and fashion, the Air Maestro became nearly as legendary as the man himself (and I have the Fleer basketball card to prove it!).

While the Air Maestro was seemingly plain, its mythic standards (to sneakerheads) remain in its achievements and the popularity of the basketball players that took to the blacktop and the rec center gyms to for hoop time. Henceforth, the Air Maestro marked the start of a future beautiful relatio

nship between Pip and his sneakers, allowing the swingman to gain enough steam individually to get his own featured sneakers series with the Swoosh under his namesake—the Nike Air Pippen.

What followed was an assembly line of five Air Pippen shoe sets, and three of those annual sleds (the Air Pippen I, I, and III) have become classic Nike basketball releases. Alongside the shoes, Pip himself won another three championships with Money Michael Jordan and nearly won a fourth in his first season with the Portland Trail Blazers in 2000.