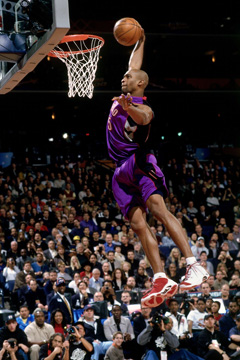 very year, hundreds of basketball sneakers are produced, issued, sold, and played in on the hardwood worldwide, and for every year in the NBA, at least one star player has a special season that is the peak of his career—and a signature shoe that shares in his glory. That’s what Sneak Peak is all about—highlighting players and their sneakers from the past 25 years who shared the spotlight with iconic play and iconic style.

Al Harrington was a rookie, fresh out of St. Patrick’s in New Jersey.

Pippen was traded from the Houston Rockets to a true contender.

Rasheed was being Rasheed.

The ‘99-00 NBA season was a milestone in more ways than one for the Association, and not just because it was the final season of the 21st century.

Oh, oh, I know he was a Toronto Raptor, but you probably forgot he was reppin’ the Golden State for several successive minutes in late June of 1998. He got his cap switched up, and he was in Canada just like that.

February 2000 was an excellent night to make the world remember who he who bled Carolina blue really was.

The previous year, young Vince was killin’ cats in the League. Wearing silver and purple jagged pinstripes with a violet velociraptor across his chest and abdomen, Mr. Carter was punishing people like he was Frank Castle. A slam here and a slam there was his signature, with a violence bend on the rim each time, as patrons of the SkyDome bore witness. Pumas flyin’ through the air as he would reach heights that literally allowed him to be nearly parallel to the floor from which he jumped.

Then his feet began to hurt.

Soon, those new mountain lion sneakers he chose over the Swoosh, the Vector and the three stripes were inferior in his arrival as an emerging superstar, and so he wore many amongst many.

The AND 1 Tai Chi was a simple shoe to see, but pleasurable in its simplicity. Using a base of either black or white, its accent color was seen as it halved the entire medial side of the shoe. On a basic, contoured dense foam midsole (EVA, or ethyl vinyl acetate for the more scientifically minded), along with a respectable rubber outsole, the Tai Chi was a hit, easily. Larry “Silky Smooth” Hughes sported the black and red version before he was shipped to the Golden State Warriors midway through the ’99-00 season, Raef LaFrentz was wearing a white/navy combination of the shoe in Denver, and good ol’ Shammond Williams was wearing a white/green as a Seattle SuperSonic.

t line and over 46 percent on overall field goals gave Vinsanity the opportunity to play in the All-Star Game in his breakout season, and he wasn’t going to disappoint—not at all. With his cousin/teammate Tracy McGrady competing, with Stevie Franchise, Silky Smooth and Jerry Stackhouse waiting in the wings, VC made his way through the legendary 2000 Slam Dunk Competition with a Leroy Green-like glow.

VC courted the rim like a new prom date, complete with his team’s then-new Nike Dri-Fit Raptors uniforms, split in color not unlike his shoes—purple in front, black on the back.

Balls bouncing between lower appendages and rolling between digits into the orange iron cylinder.

Forearms hanging, and 15-foot two-hand leaps toward the basket.

A heavily bandaged finger was going to do no wrong to Mr. Carter (nor where his other lesser competitors).

He was the Last Dragon for sure.

Those white and red Tai Chis were mere instruments that he used to mesmerize the crowd in the now-Oracle Arena, and the legend of Vince Carter grew. So, too, did his star, and his new shoe contract with a certain mythic goddess of victory. He eventually became the bane of the Raptors existence after flashing his brilliance in his first three seasons. New Jersey acquired his services and he returned home to central Florida in the summer of 2009, looking now to expound on his unfinished journey with Jerry West embroidered just below his collarbone, with his legacy in limbo. Meanwhile, the Tai Chi has been given new life in its original form, and like a phoenix, has arisen with the similitude of its predecessor, but with the update of a Puff Daddy record.

Like the sneaker’s colors, Vince Carter has shown two sides of himself as a player, in his case, the better and the less-than-considerably-good…but the events of that unforgettable February night remain unchanged and monolithic to all memory.

The feet of the star became the stars themselves.