Twitter didn’t really start popping off until the fourth quarter. That’s when everyone started texting each other, being like, Yo, Devin Booker is on fire.

The 20-year-old was out there just gunning up shots, forcing his way to the free throw line, collecting points. His teammates, his coaching staff, even the ever-loyal Celtics fans, they all knew that history was there for the taking. And D. Book took it.

He had scored 19 in the first half, and 23 more in the third quarter. Then he put up 28 points in the fourth, finishing off an epic night with a blaze to get his 70 points. He did it all in a Nike Hyperdunk 2016 Low PE, with his “DB” logo on the tongue. The black colorway was accented with an orange Swoosh and a hit of translucence on the outsole.

Booker’s become one of Nike’s go-to guys. He had a Nike Zoom Rev PE release a few months back and he’s been laced in PEs or Kobes since he entered the League.

And though the Suns lost, Booker got one more dagger in on the Celtics. Jae Crowder, still playing with the white and green back then, commented on the NBA’s Instagram post, saying “NEVER SEEN SO MANY GUYS HAPPY AFTER AN ‘L.” Booker then simply responded with, “@bossman99 you can’t guard me.” Legendary.

Run through the gallery above to see flicks of the game and peep the video to see Booker in action. 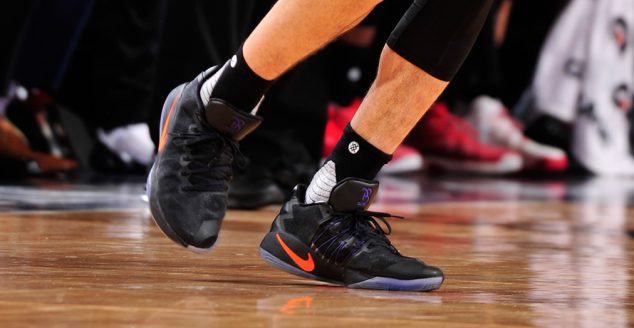