The Lakers and Celtics, the NBA’s titans, were meeting for the second and final time that season. Nearly two weeks earlier, the C’s stormed into Los Angeles to steal a 109-96 win.

That game was the first time that they had matched up since the 2010 Finals, when Ron Artest’s three-pointer helped the Lake Show capture the title in Game 7. Before that, in 2008, the Celtics demolished the Lakers in Game 6 to win the championship.

By early February, 2011, the historic franchises had rekindled their rivalry. And they were both steamrolling through the regular season. Before they did battle on February 10, Boston had a 38-13 record. LA wasn’t far behind, sitting with a 36-16 mark. Between Kobe Bryant, Pau Gasol, Lamar Odom, Andrew Bynum, Kevin Garnett, Paul Pierce, Ray Allen and Rajon Rondo, the star-power was through the roof. But February 10 belonged to the sweet-shooting Suga Ray Allen.

He warmed up in a green, white and gold Air Jordan IX and Air Jordan XI. But the mismatched PEs were only an appetizer.

He came out for the game in an Air Jordan XIII PE. His name was written in script across the tongue of the white and green kicks and they featured a green hologram on the lateral side. 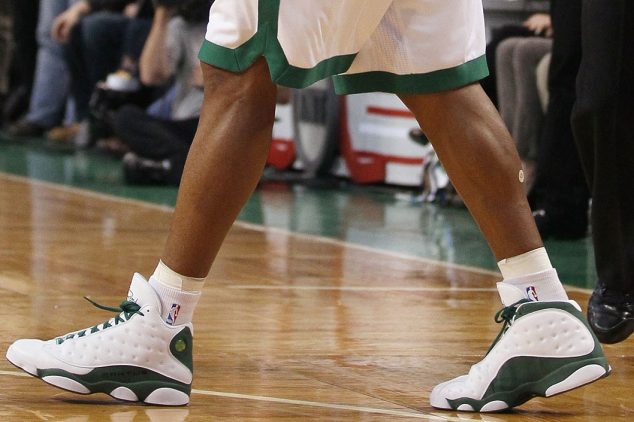 “And then there were the XIIIs, which I broke the three-point record in. Those bring me right back to that moment in 2011,” Ray wrote in SLAM Jordans Vol. 3 last year.

Scroll through the gallery above to see the photos of the special pair and peep the video below to watch Ray Ray make history back on that February night. Happy birthday, Ray!

Related
Ray Allen Writes About his Love for Sneakers