If you have had the opportunity to visit the SoHo district of NYC recently, you have probably come across the newly opened Stadium Goods. Built on a foundation of hospitality and seamless customer experiences, Stadium Goods is seeking to establish themselves as the premiere sneaker marketplace in the industry. SLAM had a chance to sit down with owners John McPheters, Jed Stiller, and Yu-Ming Wu to discuss Stadium Goods, their take on the current sneaker market, and where they see the sneaker industry going in the next five to ten years.

SLAM: You guys have a beautiful space here and I understand that Jorge Porta is responsible for the design. What did you guys envision when deciding on the appearance?

JM: We wanted it to be super clean and welcoming, very much in the same vein as many hospitality-oriented spaces. We wanted people to feel at home and not feel imposed upon by the way that we laid it out. So, we created a lot of space so that people have room to walk around and browse; and so that we could staff it appropriately so that customers can always find what they need.

SLAM: You guys have seemed to form a Big 3 or “Dream Team” of sorts with this particular ownership group, given all of your respective backgrounds. How did this trio come about?

JS: We [John McPheters] have known each other for about 15 years.

JM: Yeah, he used to kick me out of his clubs back in the day [laughs]; and Yu-Ming we’ve known over the years and have come to be good friends just dealing in the business and knowing a lot about sneakers. So, it all came together just about as early as the idea came about, because it truly does take a village to raise a child and that concept plays very well with what we are doing.

SLAM: Yu, it’s been noted that you really had no intention of stepping into the retail world. Having accomplished so much on the virtual side of things, what about this opportunity in particular made you revert from that?

YMW: It’s funny because I’ve worried all my life about carrying product and having a physical space. I just could not think of it, but once these guys told me about the idea I just could not help but pitch for them to allow me to get involved on a deeper level. Also, I know Jed and John have been through their fair share of businesses and have done really well so when they decided to do this I had to be a part of it.

SLAM: John, with you having been involved with Flight Club for such a long period of time and helping them establish an iconic name in the sneaker industry, so what made you decide to branch off and start your own venture?

JM: It’s all love for those guys over there; I just think it was time for me to leave when I did. I think that I’ve always had a strong passion for growing brands and creating things that are new and bringing them into the market. I really wanted to do something that was unique and offers a very high-caliber of service in a space where that typically is not present. Jed and I have also had some other projects that we have worked on together that have done well; so it gave us the opportunity to transition into something else.

JS: And we know this business when it comes to the sneakers and apparel, so why re-invent the wheel, you know? We could have done something else, but we wanted to stick to what we know and decrease the learning curve that a lot of start-ups experience.

SLAM: What is your take on the current state of the sneaker market (aftermarket, resellers, limited releases) and did your opinions have any affect on the approach when conceptualizing the store?

JM: You have traditional retailers and brands that sell product based on the seasonality of what they are pushing. You also have the customer that wants selection that does not exist in the market. So, in my mind we are trying to bring those two worlds together, as we want to be able to provide that selection along with a premium retail experience. We also feel that a lot of the apps out there struggle with being able to verify product, which is another thing we like about our model.

YMW: I think what’s really cool right now is that kids are opening their eyes to all sorts of different brands. It’s no longer just a Nike or Jordan thing. It’s now Asics, Saucony, and brands like this that you see kids lining up for. Of course there is still a small percentage of people buying this stuff just to resell, but there are also a lot of kids that genuinely enjoy these brands and want to have their stuff.

SLAM: One thing that I’ve noticed is that there is great emphasis placed on the fact that there are two locations: one for selling and one for buying. What was the thinking behind that?

JM: The people selling shoes are stakeholders just as much as the people who are buying shoes. It’s not a second-class citizenship. We want to make the process as seamless and educational for the consignors as possible. It also keeps things cleaner for the buyers and sellers not having to stand in the same lines.

SLAM: What direction do you guys see the sneaker game heading in the next 5-10 years, and what about SG will allow it to withstand the change in culture?

JM: I realize that I’ve been vested in sneakers for a very long time. When I was eight years old, I would take my mother into the store to get the Bo Jacksons or the early Jordans. I’m 36 now and the game has been growing ever since then. This isn’t a trend or fad. People need stuff to wear on their feet and they’re going to wear athletic shoes. Might certain styles come and go? Sure, but this isn’t going anywhere. Actually, as it becomes easier to transact internationally the market is only going to expand. 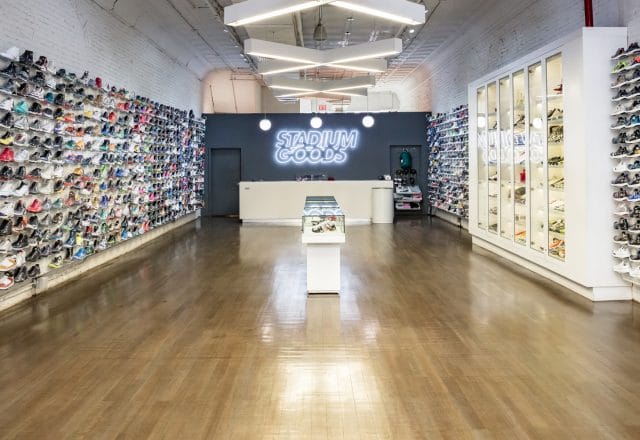 The Impact of the Air Jordan I on Stadium Goods 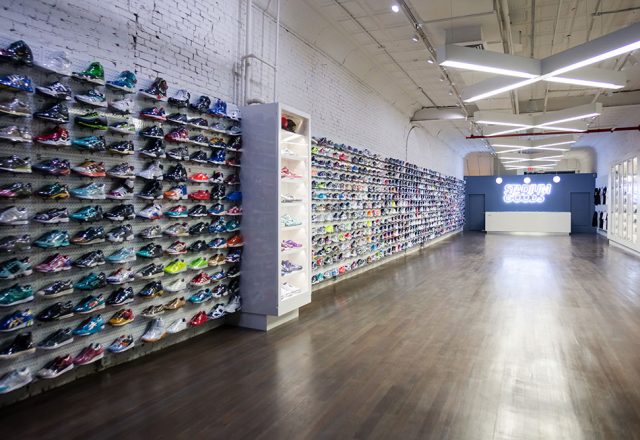