Our friends at Stance Socks continue to make major moves. You already know them as the official on-court sock provider of the NBA. Now, the same goes for Major League Baseball.

Today, Stance announces they are the official on-field sock of the MLB. For the first time, Stance will bring its swag to baseball during the MLB’s All-Star Weekend. 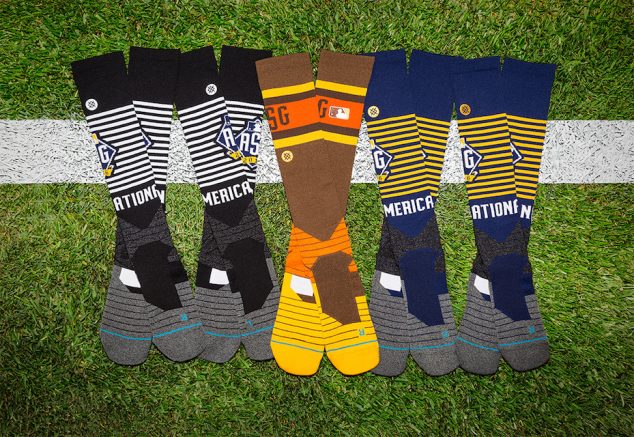 Here are all the official details, straight from Stance:

The look of baseball is inextricably intertwined with American life. With a uniform that speaks to heritage and logos so prolific that we wear them to rep our cities, what players wear on the field transcends sport. Stance and Major League Baseball (MLB) today announce the evolution of the on-field look of baseball by entering into a long-term, global partnership that names Stance the Official Sock of the league.

As the brand that shook up a boring sock category by injecting it with art and science, Stance will bring its ethos to MLB for the first time at the 2016 All-Star Game where Stance’s new Fusion Baseball sock will debut as part of the official uniform. T-Mobile Home Run Derby participants and both National and American League teams will each have specific designs, and post All-Star Game, basic stripe and solid colorways will be worn by Major Leaguers for the remainder of the 2016 season. A more comprehensive lineup of styles will be making its debut on the field and at preferred Stance retailers at the beginning of the 2017 season. The brand will also expand its current casual product, which consists of Stadium, Legends and team logo collections.

This announcement comes just a year after the brands successful debut with its licensed MLB line which includes the Diamond, Legends and Stadium Series Collections of socks. Stance will also be expanding its roster of casual styles, allowing fans to represent America’s pastime in an uncommon way.

For the upcoming unveiling of the full Stance MLB Fusion Baseball Collection and to learn more about what’s on deck, go to stance.com/mlb and follow @stancebaseball.