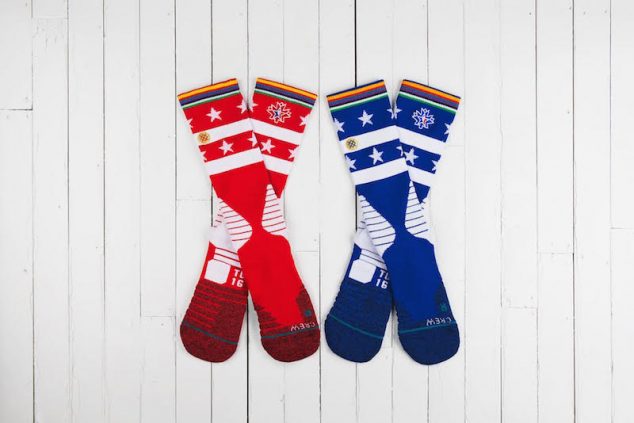 And here’s the Friday night sock for the Rising Stars Challenge, inspired by the Raptors x Drake alternate uniforms: 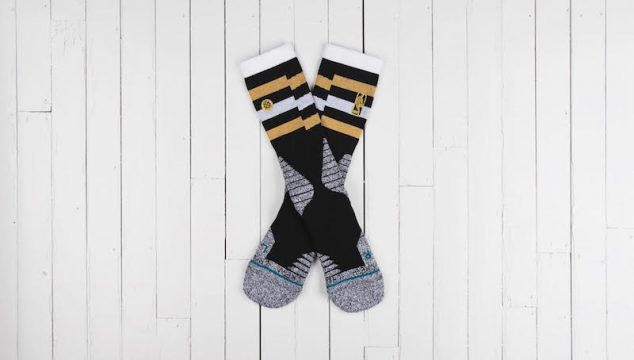 More details on all this, straight from our friends at Stance:

Stance, provider of the official on-court sock for the National Basketball Association (NBA), unveiled the sock collection for the upcoming NBA All-Star Game, which is being held February 14, in Toronto. The sock designs draw on elements of the All-Star Game uniform as well the sights and attitude of the ever-popular host city.

The Western Conference sock, which is red-and-white, and the Eastern Conference sock, a complimentary blue-and-white, are both colored to accentuate the uniform. The embroidered Stance logo on the front of each sock is gold, to represent the magnitude of the 65th All-Star Game, while the NBA logo on the back is encased in a Toronto-associated maple leaf. The cuff of each sock incorporates a ring of multiple colors that pays homage to the same stripe on the uniform. Meanwhile, in an effort to memorialize the Game, the footbed includes the phrase TO16.

The All-Star Game is not the only event getting a commemorative on-court sock in Toronto. On Friday night, during the BBVA Compass Rising Stars Challenge, rookies and sophomores will don special footwear. The black-and-gold sock owes its design to both the event’s uniform and the Toronto Raptors’ alternate team colors. The gold Stance and NBA embroideries serve as a reminder of the gravity of the event.

Stance will also host its annual All-Star Spades tournament with Dwyane Wade of the Miami Heat on Thursday, February 11th in Toronto. Many of the world’s best basketball players will mix it up on the card table to take home the Spades championship trophy.

Adam Silver: Kobe Bryant ‘Deserves’ to Be an All-Star