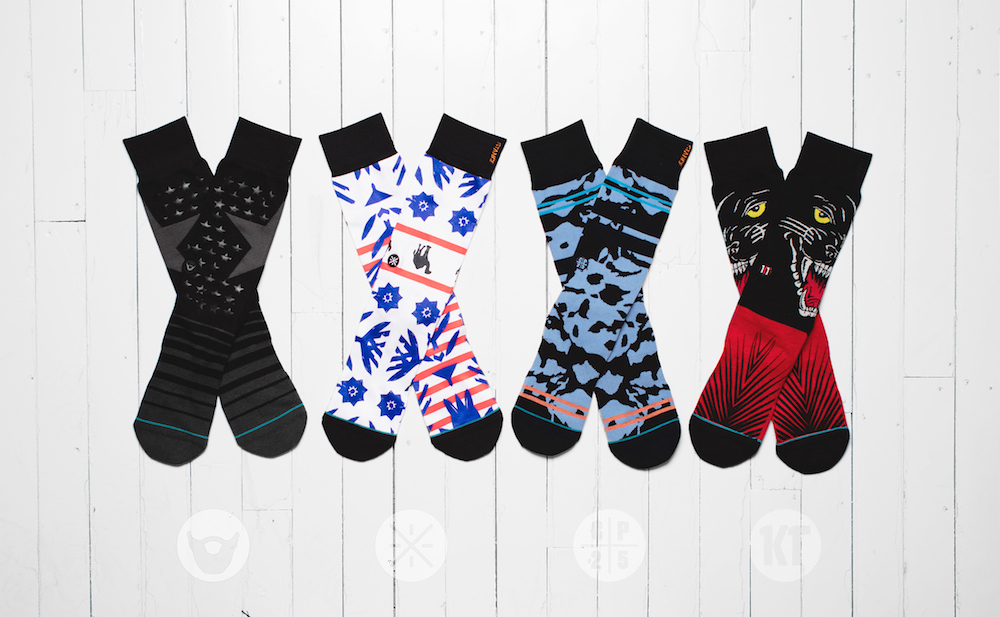 According to the brand, the total of 12 men’s crew styles will retail for $18 per pair online at Stance.com, while also available at Foot Locker, Finish Line and other major retailers worldwide. And each sock features a custom embroidered logo for each player, along with the Stance logo.

Scroll through the photos above to get a closer look at each player’s individualized style. The inaugural “Squad” Collection is for off-court, designed by the stars you know and love on-court. Get more details on each player’s sock, straight from our friends at Stance, below:

Dwyane Wade became Stance’s first Hoops Punk & Poet in 2013, and the first NBA player to have his own sock line. Since then, has collaborated on multiple Dwyane Wade signature collections and is now representing his unique design style in the Squad Collection. Wade’s four socks for the Squad collection are inspired by Egyptian nights, tying in his mix and match design aesthetic and application of bold colors. Like his previous Dwyane Wade signature collections, the Squad styles come embroidered with Wade’s personal logo.

Harden is a brand ambassador for both Stance Hoops and the men’s underwear collection, which launched last year. Harden’s four styles for the Squad Collection were designed with a clean aesthetic, playing off of pop fashion, while using mostly black and white tones. Harden’s signature insignia, which is embroidered on his entire collection, is designed in the shape of his infamous beard.

Klay Thompson joined the Stance Punks & Poets team last year, months before the Golden State Warrior won an NBA Championship. Best known for his shooting abilities, Thompson also has a deft touch off the court. Not surprisingly, then, his signature styles stand out with their raw style and bold graphics. Like the other Squad styles, Thompson’s all boast an embroidery customized to reflect his personal aesthetic.

In 2014, Chandler Parsons joined the Stance family as a brand ambassador. Following Parson’s successful signature flamingo style from 2014, Parsons joins the Squad with his creative contributions to this new collection. Parson’s two signature Squad styles play off of his roots in Florida, years in Texas and current home in Memphis, TN. Parson’s styles are marked with his own insignia, which include his initials and his jersey No. 25.