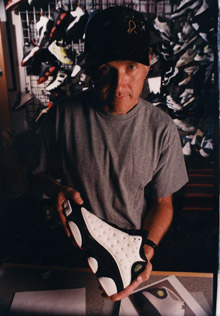 When you think of Nike, what names come to mind? Michael Jordan, sure. LeBron, of course. Maybe Tiger, Griffey, Jr. and Michael Vick. Basically, the athletes. If you’re paying even a little bit of attention, you should know Phil Knight. And if you get deep, maybe even Bill Bowerman and Steve Prefontaine—and Lil’ Penny and Mars Blackmon, of course.

Tinker Hatfield might just be the most important sneaker designer ever. Seriously. At this point, he’s a cross between Willy Wonka and Don Corleone. “We joke and call him the Godfather, kiss the ring,” says fellow designer Aaron Cooper. “Most people just see him as a Jordan guy, but he’s the career innovator, actually.” Need proof? Let’s do the list.

Air Jordans? Tinker is responsible for the vast majority of ‘em, from the III, back when Michael was actually considering leaving Nike, to the XV. And he’s recently come back on board with Jordan, despite being Nike’s VP of Special Projects, to design the Jordan XX. But that’s just the beginning. Cross training? He invented it. Yes, the whole concept. Air Max? That was his. Huarache? Yep. Name any big-time Nike innovation of the past 15 years, and it’s likely Hatfield had his hand in it.

And if you pay attention, you’ll notice the aesthetic that shines through every Tinker shoe, from the Air Raid to the original Air Max runner, from the Air Trainer I to the Air Jordan VII. Every Tinker shoe may not look alike, but they definitely share a certain feel. “It’s that 50-yard read,” says Mark Smith, another Nike designer who has collaborated with Hatfield for years. “How does it look from a long way away? I don’t think you’ll find a lot of details and extemporaneous fluff in Tinker’s designs. They speak to the function of the athlete through the form of the shoe.”

Function determines form. This is an old concept for Hatfield, who joined Nike in 1981 as an architect. He designed buildings for the company’s Beaverton campus before flipping to shoe design in 1986. He may be working on a smaller scale now, but many of the traits that served him well in his original job still hold true today. And it shows. “With all of his designs, you can put them up on the wall and there’s a consistency,” says Smith. “It’s like looking at a Frank Lloyd Wright house; there’s differences in all of them, but they all stand together. The style is very consistent.

“There’s a thing that speaks to Tinker in every pair-from cross trainers to the Jordans to the Huaraches,” Smith adds. “Consistency is probably his most key trait: well-crafted performance design.”

When working with top athletes, designers need to not only be able to share their vision, but to be able to interpret their performance needs into a marketable product. In this, Hatfield has been untouchable. “Tinker is just even-keeled with the ability to draw inspiration through conversation rather than a list of 50 questions,” says Smith—and nowhere is this more clear than in his relationship with Jordan. Mike is obsessed with style and performance when it comes to sneakers, and in Hatfield, he has a partner-an equal partner-in who he has ultimate faith. “They seem to co-exist in superstar status with each other-that’s what keeps them even,” Smith says. “Tinker defers to MJ in basketball, Michael defers to Tinker in terms of shoes. But somebody has to make the final call, and Tinker takes the lead on that.”

That’s what Tinker Hatfield understands better than anybody, possibly ever. And that’s why you should know his name.