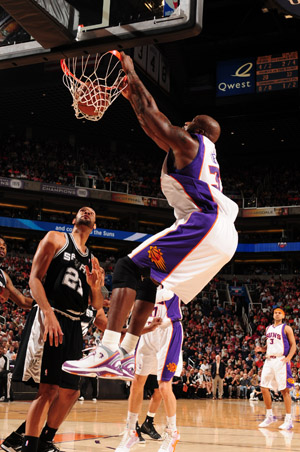 I get it. You’re a tad confused. Rightfully so, I suppose. I mean, this is KICKS after all. And this is the Hall of Fame. And you see Shaquille O’Neal rocking a pair of his Dunkmans and you’re wondering what this all means.

We already know what we are: a consumer driven society. And when I say “we,” I’m talking about those of us who drop $150-plus on a pair of sneakers without hesitation and then wonder why others don’t do the same. These days though, sneakerheads have to be creative. Who are we kidding? Regular people have to be creative as well. That’s where Shaq comes in.

When Shaq entered the League breaking backboards, he was doing it in Reebok Shaq Attacks. It was a good shoe, aesthetically pleasing with Orlando Magic silver and blue and highlighted by boldface lines across the sides. The logo was cool, too, capturing his trademark two handed-knees elevated dunk.

A great shoe was followed up by the Shaq Attack Instapump (an underrated classic), the Shaq Attack 3 and the Shaqnosis. Two things I remember about the shoes: They were very high hi-tops, and they were expensive, $130 worth of expensive, which by today’s standards is high but a decade ago was outrageous. Not surprisingly, the shoes didn’t do much. Shaq and Reebok parted ways in the summer of ’98, Reebok unconvinced that the $3 mil per they gave The Diesel was worth the money.

Instead of giving his name and brand to yet another athletic powerhouse, he ventured out on his own and established his own brand simply called Shaq, which sold for $30 (legend has it that he was motivated after being stopped after practice by a crying mother who wanted to know why his designer sneakers cost so much). In 2001, the Dunkman arrived. It was sold exclusively at discount retailer Payless Shoes for $35. (It should be noted that although they have no sneaker industry status, Payless is a multi-million dollar company with over 27,000 employees, so it’s far from a mom and pop operation.) Sales were great, he was stacking Finals MVP awards and the brand grew. To date there are dozens of models of the Dunkman in performance and off-court models, including The Hawk, the Hawk Mid and the Post-Up.

O’Neal isn’t the first NBA big man to start his own line of shoes (Patrick Ewing had a short but respectable run in the early ’90s) nor is he the first baller to put out a shoe with an under-market price point (only a couple years ago, the Starburys were seen as a major breakthrough). Now in its second decade of existence, Shaq’s line stands out because of its consistency and success. Last year they sold upwards of seven million pairs in the U.S. alone. Recently Shaq hooked up with Chinese shoe behemoth Li Ning to sell his shoes in Asia under their brand in a joint partnership. This thing shows no sign of slowing down.

Granted, you won’t see Dunkmans at any so-called sneaker boutiques, you’d be hard-pressed to find any of the shoes retroed and sold on eBay and don’t even think about bringing a pair into sneaker consignment shops. Point blank, you will get clowned. But these shoes aren’t made for that market, for that crowd, for that world. They have no market buzz, no street cred, no anything. But let’s be honest: in these tough times, buzz comes off like the appeal of Megan Fox—severely overrated. They sell in the U.S. and abroad because they’re affordable and have enough of an aesthetic appeal that they can’t be totally ignored. Particularly for the parents of young kids and middle schoolers, they have to be a godsend.

You can debate the merits of the shoe’s performance potential, but  remember that Shaq wears them, and if he can wear them without the shoe exploding, then you weekend warriors can, too. Some may bemoan the fact that some of the silhouettes look like other shoes from other companies, but so what? They’re not the only ones, and besides, you’re missing the point. You can criticize them all day, but nobody gives a crap. He’s doing it for the kids. After reading this, is Shaq’s induction into the KICKS HOF that surprising?