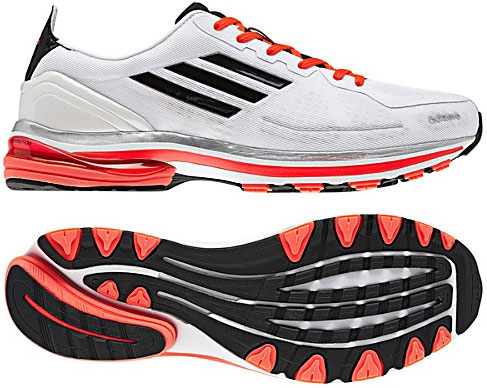 The adidas adiZero F50 is an efficient package of a running shoe, packing enough punches in its features to make it an elite runner. As its name alludes to, the adiZero initiative of adidas implies a light weight product, and the adiZero F50 is only 8.1 oz (!) It’s able to achieve this weight due largely to its upper, which employs the Coolever air mesh material for excellent ventilation; the same upper is seamless and one piece for a unique, light fit. This shoe gets more technical below the upper, as the adiZero F50 features a Formotion heel that breaks laterally to give a more independent and adaptable feel when the heel strikes the ground for enhanced transition and responsiveness. The adiZero F50 makes use of a barely-visible Torsion System in the arch of the shoe, below a high-density EVA midsole for additional arch support. The most supreme feature, aside from the Coolever upper, is the reliable adiPRENE+ foam which is featured fully in the forefoot for cushion and propulsion on runs.

When it comes to comfort and fit, the adiZero F50 wins high marks. The seamless upper provides a very close fit to the foot without the burden of there being multiple levels on material on the upper to trap heat in the shoe. Because the shoe has a non-slip lining, getting in and out of it is never a laborious task. The midsole is very dense, and as I’ve spoken about before with adidas’ foam packages, it’s very durable and has good bounce-back. On my first runs, I found that the midsole was very stiff and gave a rigid ride—but in context, the adiZero F50 is a stability shoe, so with that in mind, the stiffness I experienced was to be expected for pronation-correcting footwear, but on subsequent runs, the foam softened and became more responsive to my own pressure, leaving me better satisfied with the impact.

The adiZero F50, to its credit, isn’t too soft or too hard, and the balance of those qualities is due not only to the midsole, but to the insole, which, according to adidas, is a “molded respoEVA sockliner” that’s formed for step-in comfort and a more anatomical fit; the insole helped to achieve another level of durability and protection for the shoe while I occupied it, seemingly to keep the shoe that much more resistant against the breakdown of cushioning. There is a soft-shell heel counter that flexes just so for a more snug fit around the heel and additional support and synthetic three-stripes laces that lock across the footbridge when secured tightly. All of these things make the adiZero F50 a very strong and supportive footwear product.

My overall impression of the adiZero F50 is that it is a high-quality performance shoe for any runner looking for a balanced mix of support, durability, and lightness. It’s not as soft as other three stripes runners, but it’s cushioned enough to be happy, and because of its foam packages in the insole and midsole adjust over time, a happy medium can met in the adiZero F50 with more and more runs. It’s the sort of shoe that if you’re training for endurance and speed in a sport like basketball, your goals can be fulfilled with these particular shoes on your feet. The adiZero F50 is like a pair of jeans that gets better with age and wear. If you can afford to spend $100 for a shoe that won’t quit, the adiZero F50 is the shoe for you.