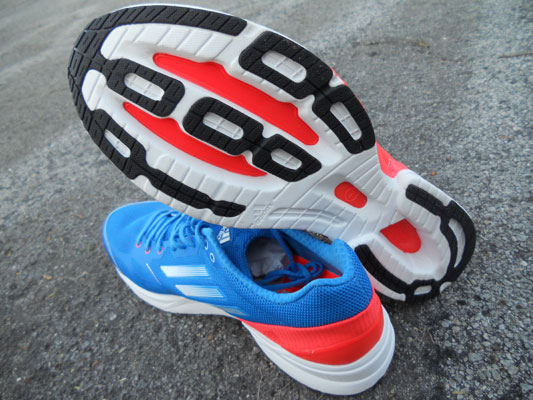 When I discovered that adidas was on the brink of releasing its newly debuted adizero Feather 2 running shoe almost two months ago, I got giddy. I was anxiously waiting for another version of the original adizero Feather to make its way to the market, and at first, I thought that wasn’t to be. There were other shoes that seems to adopt its name, in tennis and other sports, and a similarly built runner in the adizero Rush that, while popular, didn’t seem to bring back the same performance pop that I loved in the first incarnation. But alas! Adidas held true and make a sequel that made its first showing seems a fair bit pedestrian.

In truth, the adizero Feather 2 builds off of the strength of the original, and for me, is one of the strongest performers in the market at this time, and maybe the best adidas running shoe in 2012 so far. Here’s how adidas describes its latest featured shoe, which is also being trained in by the company’s athletes in the current 2012 Olympics in London:

At just 6.7 ounces, the adizero Feather 2 is one of the lightest every day running shoes. Updates include an extended SprintFrame from toe to heel, which is now micoach compatible, and a full SprintWeb upper for lightweight support.

The adizero Feather 2 features a new SprintFrame platform directly attached to the upper that keeps the foot locked in for speed. The SprintFrame replaces the conventional construction and saves shoe weight significantly, while maintaining comfort and returning energy to each stride. The TORSION System allows freedom of motion in the front and back of each shoe.

adiPrene+ and an adiWear rubber outsole ensure long lasting durability and traction. Strategic foam placement on the sole allows for a quick toe-off.

From that, adidas makes a point to describe the adizero Feather 2 as lightweight, nimble, supportive and comfortable, and durable, and I completely agree on all counts, but there’s another word that is a worthy adjective concerning the shoe: powerful.

The adizero Feather 2 is powerful, and it’s not something that you glean from just seeing the shoe or holding the shoe; wearing the shoe and putting it to the test is the only way. Said power is harnessed through its strength and light weight; having already touched on its featherweight, the materials are such that the shoe isn’t compromised during runs, long or short. One such material that takes a backseat in its callout, but is instrumental to the shoe’s makeup is the Zero mesh, which is featured prominently on the upper; while bonded with the SprintWeb, it makes for a fit that is extremely breathable with great tensile strength. In fact, the Zero mesh-SprintWeb combination provides a near-perfect fit in the upper, as there is no excess mesh (a welcome refinement from the original shoe) and the fit in the toebox is great.

Other aspects of the shoe that stand out for me are its aforementioned comfort, and that extends through the strong laces, the breathable and thin tongue, the light eyestay pressure over the bridge of the foot (with the help of the SprintWeb) and the high-grade EVA midsole (and the requisite adiPRENE+ cushioning in the forefoot) that made for snappy responses in my speed training.

The adizero Feather 2 is efficiently built and it’s just a wonderful fit for me, personally; I’ve battled plantar fasciitis and am almost fully healed after an entire year of dealing with the condition, and one of the biggest lessons I learned with that I need shoes that are torsionally rigid—without question, the reason why I love the adizero Feather 2 is because of the heralded SprintFrame, which flexes as my foot flexed, but maintained its structural integrity for my feet and I endured no pain, something that I have been extremely thankful for whenever I have been afforded the pleasure, and the adizero Feather 2 has earned my praises.

What more can I say? If you want a lightweight, strong, power, supportive running shoe that will improve your cardio training, the adidas adizero Feather 2 is incomparable in character and performance.

Sandy Dover is a published author, media consultant, and web & print magazine columnist in the world of publishing, while serving as an expert sports product evaluator and as an independent wellness & training consultant, advocate and journalist in the health & fitness industry (with the two worlds often colliding). You can find Sandy frequently here at SLAMonline, as well as at about.me, Facebook and Twitter.