The Mystery of Derrick Rose’s Feet 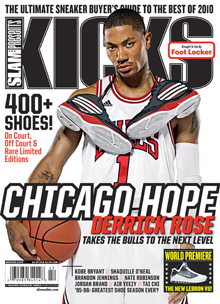 The feet of Derrick Rose have taken the young man many places. Those feet took a shielded, quiet, shy young boy off of the streets of the rough neighborhoods of Chicago and led him to local rec courts around the city. Four older brothers decided that the young man needed to be raised with the type of village only an African proverb could parallel. Rose was called a prodigy from a young age and entered the history-rich Simeon High School (also known as Simeon Career Academy), where his feet found proper footing, flashing what was to become a 6-3, 200-pound point guard in only a mere few years.

Those feet, Jordan-clad of course, kept an on-tilt and balanced young Rose zipping baseline to baseline to a state championship in royal and gold and No. 25 sewn onto the closed-hole mesh top, with a certain Jordan’s high school colors seeming eerily familiar; Laney High, to be exact—not that the G.O.A.T. wasn’t an inspiration, but the numerals themselves were an honor, an homage to a fallen star of the streets and prep hardwood; Ben Wilson was the honoree.

Yes, yes, the feet of Derrick Rose gave him all sorts of attention his senior year at Simeon. “Hello Ronald McDonald, I see you clearly—I like the Reeboks, even though I don’t. Hello New York City, hello Mr. Jordan, thanks for the new shoes and nice duds for the Classic, you know I wore you in high school,” his feet must’ve silently uttered. And the young guard made everyone notice on TV, and ESPN didn’t discriminate.

That must be the reason why young Derrick was heralded by fans and experts alike as the best freshman on the block. It would have seemed as if he should’ve been greeted with olive branches, leaved crowns and immaculate togas on arrival to each of his scheduled collegiate games; he was clearly an heir to the next great point guard throne. Yes, those feet were good to him in ’07-08, too.

The University of Memphis gave him a scholarship, and Coach Calipari gave Rose the keys to his baby—a championship-contending mobile of a team that would ride high and fast through Conference USA and the NCAA. Young Derrick was ready, but he was nervous, too. Afraid that he couldn’t live up. Afraid that he wouldn’t be what people expected he’d be. Afraid to fail in front of everyone. That’s why Rose decided to practice after

practice, and lift weights after team weightlifting sessions, for up to four additional hours per practice. Every day. And Calipari had locked him out of the practice gym as soon as he found out.

But that team lost its most important game. It was only one game, but they lost that game (it was the title game). Adorned the young man’s feet were adidas (his Jordans hadn’t failed him—he won back-to-back state championships in high school in the Jumpman and the Swoosh—his Simeon teams were the only ones in Chicago prep history to do that. Take that three stripes.).

Fast forward to mid-April of 2008, and after being drafted as the No. 1 selection of the 2008 NBA Draft, Rose was making believers of even his most faithful believers. Rookie of The Year? Sure! He should be. And nothing says Rookie of the Year than leading a team filled with duplicity at your position, or leading a team filled with goody two-shoes that had didn’t have such a will to win that any of the guys would cry at the thought (we’re not making fun of you, Derrick; it’s kind of sweet in a Pooh Bear sort of way [word to the tat]).

No, Rose was taking a team of unprovens to the glory of the Boston Celtics’ championship home floor. Vinny Del Negro was on the sideline, and he wasn’t even shooting threes (!). Those feet were taking Derrick places alright. 36 and 11 in Game One? The best rookie debut in their first playoff game in points and assists? On par with Kareem? Better than MJ, the Chicago superstar? No way, but…yes, way!

One thing is eating me, though. Those feet must be taking a beating. After all, Coach Calipari did lock out Mr. Rose because of knee tendonitis from overtraining. But then how did he play so excellently through that long, long 38-game season? Yeah, No. 1 (literally by draft order and jersey number) started off quick at the beginning of ’08-09. Teams were for sure matching up with him better, learning his tendencies and such. But how are his feet holding up? His lower body? I mean, those thick neoprene adidas Creator sneakers around his ankles… is something the matter?

He continued to improve, finish like a veteran, elevate wonderfully on h

is jump shot, so maybe the feet weren’t the issue; or maybe not. It’s curious how a young kid like No. 1 could be wearing such a bulky shoe. No one in the entire NBA or the NCAA has those thick straps coming from the top of that make of shoe. They look so heavy. And Derrick’s still so quick, and fast, and quick. I just don’t know. I haven’t seen Creators like that. The Bulls’ own media man himself, Sam Smith, couldn’t tell me anything about them; neither could David Thorpe from IMG and ESPN. They were clueless about those feet when I mentioned them—hadn’t even noticed. Oh well.

MJ used to say “it’s the shoes” for Nike. Adidas doesn’t say much about that, except that “impossible is nothing,” but that only vaguely applies to our hero. I’d say this about Poohdini—it’s those feet. Those wonderful, wonderful feet. I’d try to catch a live game, maybe sneak into the locker room, and see if those dogs have wings attached to them, maybe like he’s Namor the Sub-Mariner or Mercury or someone. I just have a bit of advice for No.1—don’t overtrain; no adidas can grip any glossed-up pine with inflamed knees—and if those straps that make your mid-cut shoes into high-top sneakers helped you to burn the 2008 NBA champions, go ahead with them, because those feet… those feet are taking you places.