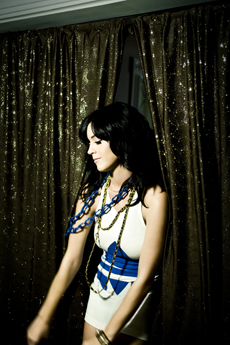 Remember that Janet Jackson video where she was in the house party with the foam and the people piling up on top of each other all over the place? This one. I always wanted to find a ridiculous party like that, but most of the parties I went to ended at 3 a.m. with two guys fighting outside of a donair shop.

I can take solace in the fact that I’m not the only one who craved that ultimate house party scene. Adidas just sent over a link to a house party they put together a while back for their Celebrate Originality campaign that featured some big names in sport and entertainment (but not sports entertainment). Two of adidas’ biggest guys, in David Beckham and Kevin Garnett, got things started with a mini skills competition, trying to kick a ball into a basketball hoop.

The adi-party takes place in a house packed with all kinds of talent. Along with KG and Beckham are musicians DMC, Estelle, Young Jeezy, Redman and Method Man, Russell Simmons, Missy Elliot and one of Lang’s favorites, Katy Perry. There are also some names here that I’m not gonna pretend to know: the Ting Tings, Afra, Ryukyudisko, tennis player Ilie Natase, skateboarder Mark Gonzales and designers Kazuki and Jeremy Scott. The house party video marks the start of a year-long campaign to honor the 60th anniversary of adidas using the three stripes as its logo.

It might be missing bubbles all over the place, but they managed to cover indoor skateboarding, painting, bathtub debauchery and swimming pool chaos. I’m craving a donair.