Top 20 Basketball Sneakers of the Past 20 Years: Nike Huarache 2K4

Since the debut edition of KICKS hit newsstands in 1997, NBA Stars have graced the hardwood in countless fire sneakers. To celebrate KICKS’ 20th anniversary, we’re counting down the 20 best we’ve seen over the past 20 years—and the moments that defined them. At No. 4 is the Nike Huarache 2K4, the sneaker that Kobe Bryant made famous. –Ed. 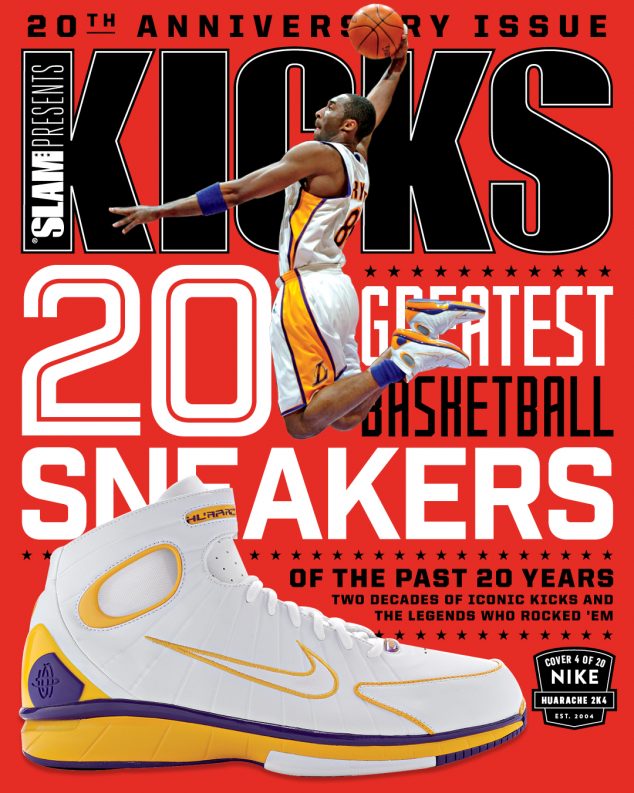 The Sneaker: Before his first Nike signature sneaker came out in 2005, the Huarache 2K4 became Kobe Bryant’s weapon of choice. Bean’s ’04 season, when he continued his ascension to superstardom with averages of 24 points, 5.5 rebounds and 5.1 assists per game, certainly helped the 2K4 solidify its place as a classic basketball sneaker.

Look under the hood, though, and the 2K4 was bound to earn its place in history even if Bryant never laced it up.

Avar, the 2K4’s lead designer, looked at the Air Force 1 for inspiration. He liked the AF1’s tried and true aesthetic and wanted to combine that clean look with a high-performance on-court sneaker.

He extended the Huarache line by including a neoprene inner bootie in his new silhouette. He built out the rest of the sneaker with a Phylon sole and Nike Zoom cushioning to make it light. To give support, he used a collar strap. To echo the AF1, he plastered a big Swoosh across the sneaker’s leather and suede upper.

Then he handed the silhouette over to Kobe, who carried it from that season’s All-Star Game all the way to the NBA Finals. Other players followed suit, and the 2K4 still pops up throughout the League.

The Moment: Kobe Bryant launched a contested three to send the last game of the ’04 regular season to overtime. Then, in the second overtime, he drilled another three-ball to break the Blazers’ hearts.