Top 20 Basketball Sneakers of the Past 20 Years: Nike LEBRON 8

Since the debut edition of KICKS hit newsstands in 1997, NBA Stars have graced the hardwood in countless fire sneakers. To celebrate KICKS’ 20th anniversary, we’re counting down the 20 best we’ve seen over the past 20 years—and the moments that defined them. At No. 16 is the Nike LEBRON 8, the pair that King James wore in his first season with the Miami Heat. –Ed.

The Sneaker: LeBron James’ first season with the Miami Heat coincided with the release of his eighth signature sneaker. During that 2010-11 season, LeBron was simply overpowering his opponents. He would bound down the floor, put his shoulder into the defense and spring up with unparalleled quickness and power.

To support his imposing game, Nike packed the high-cut 8 with Flywire, a 360-degree Nike Air unit and an original outsole that absorbed all the force and power that James was generating while he dunked on anyone that tried to guard him. 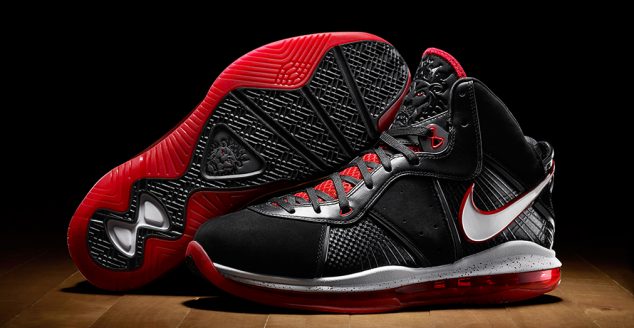 The Moment: The King erupted for a clean two-handed ‘oop and a huge windmill spike, then he collected a pair of bodies by violently storming his way to the tin.

Previously
adidas adiZero Crazylight, No. 20
DaDa Supreme Spinner, No. 19
adidas The Kobe, No. 18
Under Armour Curry One, No. 17