Since the debut edition of KICKS hit newsstands in 1997, NBA Stars have graced the hardwood in countless fire sneakers. To celebrate KICKS’ 20th anniversary, we’re counting down the 20 best we’ve seen over the past 20 years—and the moments that defined them. At No. 1 is the Air Jordan XIV. –Ed. 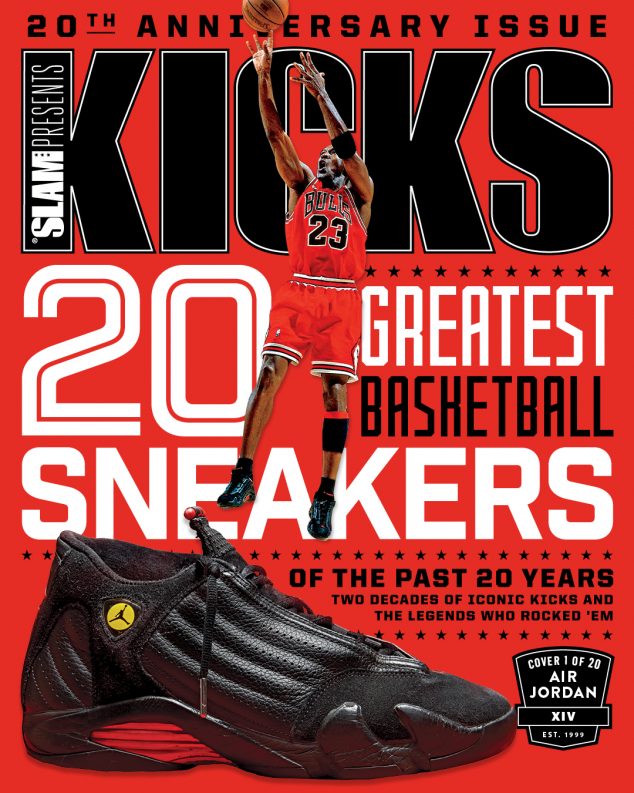 The Sneaker: OK, so it wasn’t really his last after all. But the Air Jordan XIV’s place among the immortals in sneaker lore will forever be linked to what we all assumed really was “The Last Shot.” Hence the nickname bestowed upon the most popular colorway of the XIV. Michael Jordan wore the black and red XIVs as he hung in the air and held the follow-through of his ’98 Finals-clinching game-winner in Utah. Damn if time didn’t freeze when Mike pulled up (or pushed off, if you ask Bryon Russell) and popped a signature mid-range J FTW. Pause it in your mind and you’ll see the XIVs—yet to be released—floating above the hardwood on his feet. Inspired by MJ’s love for fast cars, Tinker Hatfield and Mark Smith modeled the XIV after his Ferrari 550 Maranello, even down to the shield on the side panel with the Jumpman logo inside—one of 14 such logos found on each pair in different spots, like on the silver-tipped laces. The Jordan XIV was innovative, aerodynamic and breathable, too, with Zoom Air units in the heel and forefoot for a cushioned ride. Like the Ferrari, the last sneaker Mike ever wore as a Chicago Bull was world class.

The Moment: In a pair of sleek black and red Air Jordan XIVs, Michael Jordan rose up to sink the jumper that won him his sixth title.