Top 20 Basketball Sneakers of the Past 20 Years: Nike KD IV

Since the debut edition of KICKS hit newsstands in 1997, NBA Stars have graced the hardwood in countless fire sneakers. To celebrate KICKS’ 20th anniversary, we’re counting down the 20 best we’ve seen over the past 20 years—and the moments that defined them. At No. 10 is the Nike KD4, the silhouette that featured the neck-breaking “Weatherman” and “Nerf” colorways. –Ed. 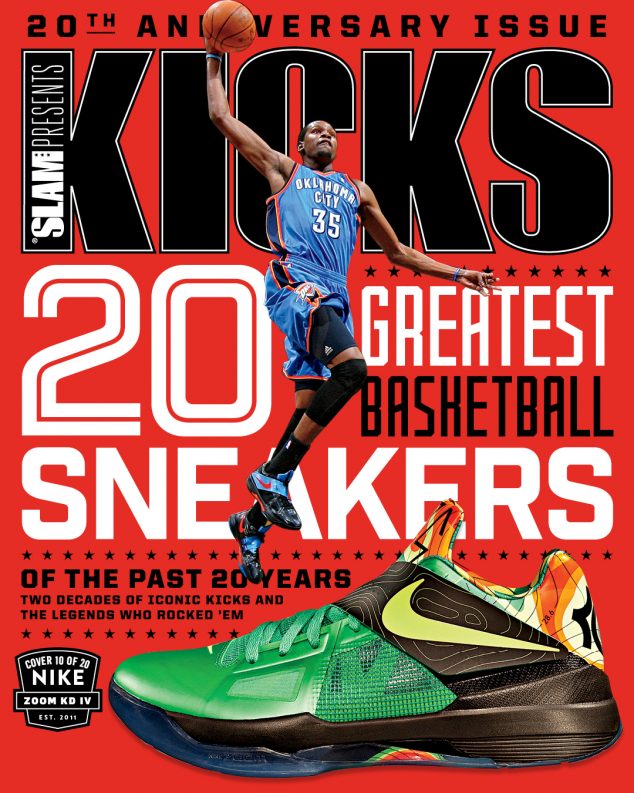 The Sneaker: Leo Chang, the man who has designed all of Kevin Durant’s sneakers, paid close attention to the KD IV. Chang had to create something light and tight for Durant’s ever-evolving game. He made the IV tight with a midfoot strap, and he made it light by stripping it of any extra materials, instead relying on Nike Hyperfuse. Chang combined the Hyperfuse with the strap to lock KD into the shoe. With the technology up to par, Chang introduced the world to the legendary “Nerf” and “Weatherman” colorways that cemented the IV as Durant’s best-known silhouette. The Moment: When Kevin Durant laced up the “Nerf” KD IV during a charity game amidst the 2011 lockout, the sneakerhead community couldn’t look away.

State of the NBA: There’s No Longer, and No Need For, One King