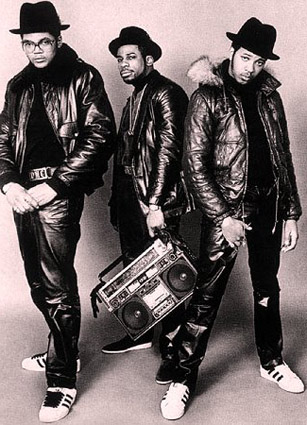 They didn’t play ball professionally. And their shoes weren’t even basketball shoes, really. But during the 1980’s, did anybody this side of Michael Jordan have an impact on making a certain sneaker cool the way Run-DMC did? We think not.

Run-DMC first blew up around ’85, thanks to hits like “King of Rock” and “Rock Box.” The hood may have known about hip-hop before then, but mainstream America didn’t really know what was up until they saw these three brothas from Hollis, Queens—emcees Run and DMC and their DJ, Jam Master Jay. That same America also learned about b-boy style from these cats, who made rocking sneakers—specifically shell-toe adidas with fat (or no) laces—an art form.

Anyone with cable TV could have picked up on the group’s adidas fascination quickly enough on MTV, but the band’s love of the brand was taken to an official level when the group released the album Raising Hell in ’86. One of the record’s most popular tracks was “My Adidas,” an unabashed ode to the joys of the freshest kicks on the market at the time. Whether you’re a youngster or a forgetful older cat, take a sample of the lyrics:

“Now that adidas I possess for one man is rare/Myself, homeboy, got 50 pair/Got black and blue cause I like to chill/and yellow and green when it’s time to get ill/Got a pair that I wear when I’m playing ball/with the heels inside make me feel 10 feet tall.”

While the song was done with the most innocuous of inentions, you just knew someone was going to try to get paid off the deal. According to Run-DMC’s former publicist Bill Adler, Def Jam honcho Lyor Cohen, who worked with the group back then, knew the crew deserved a little something as a “thank you,” so to speak. As Adler tells it, Cohen brought some skeptical adidas execs to a Run-DMC concert and let them see for themselves. “Taking a suggestion Lyor had made before the show, Run took a break during the show and held up his adidas and asked the crowd to do the same,” recalls Adler.  “When nearly everyone in the arena held up adidas, everyone saw the force the guys had on the marketplace. On the strength of that, adidas did sign them to an endorsement deal and made a shoe with them.”

As KICKS went to press, the group was busy touring in support of its latest effort, Crown Royal, but DMC, aka Darryl McDaniel caught up with us for a hot second to let us know what the experience was like. “We liked the shoes because we liked the colors and because it was a hard sneaker—leather instead of a soft canvas or suede,” DMC says. Then Russell (Simmons, the group’s manager at the time) came up with the idea for the song, and he knew it would blow adidas up.”

While Run-DMC no longer maintains its hold over America’s youth, McDaniel says the group still has a business relationship with adidas, and that “My Adidas” is one of the group’s “most requested songs, and people are always asking about it.”

DMC adds that he and the group still care greatly about the sneakers and basketball, with their affections remaining consistent with adidas and the Knicks—much like their consistent freshness means all sneaker heads should still care abut Run-DMC. Now that they’ve been immortalized in the KICKS Hall of Fame, that shouldn’t be a problem.