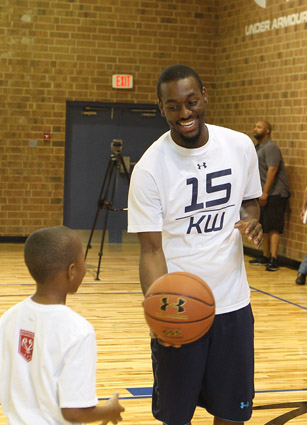 Usually a gymnasium full of this many kids is also full of the sounds of sneakers squeaking across the floor and basketballs hitting the hardwood. Yesterday afternoon was a little different. The children from the Milton Road Boys and Girls Club in Charlotte North Carolina sat patiently on the floor of their new gym as they waited for the moment they could use this newly designed basketball court to fulfill all their hoop dreams.

In partnership with the NBA, Baltimore Maryland based athletic company Under Armour re-designed this court and many more across the country as a way to give back to the community. UA has given new basketball courts to kids in Baltimore, Philadelphia and California. Now it’s Charlotte’s time to receive a new court from the company.

If receiving the fresh hardwood wasn’t enough excitement for the kids, Under Armour raised the hype level one more bar when they introduced Charlotte Bobcat point guard Kemba Walker to the crowd of young sports fans to help cut the ribbon on the new court. After a quick introduction of Kemba to the audience by Charlotte NC radio personality No Limit Larry, the ribbon was cut and the balls were rolled out. The brand new court that sports both Under Armour and NBA logos was now officially open for business.

Kemba Walker, a known face in the Charlotte community since coming to the city, stayed around and helped put the kids through drills.

“It’s exciting,” Kemba said. “I’ve given back a lot since I’ve been in the city. I do camps, sports clinics. I gave some kids tickets games. I love being out here in Charlotte. The community embraces me, and I love it. To be out here and see that I could put a smile on somebodies face is a great feeling.”

As the kids continued to go from station to station doing dribbling drills and working on their jump shots, you can tell the smiles on their faces wouldn’t be going away anytime soon.