Why David Lee Is Cool 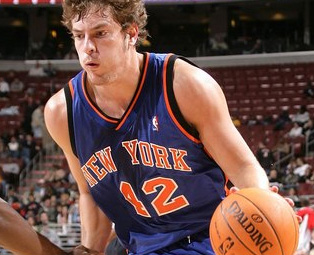 On Friday night Russ and I went to the thoroughly uninteresting Nets vs. Knicks game. Was battling sleep all evening, especially since the Nets were Vince-less and Kidd-less.

After the game in the Knicks locker room, we were talking to David Lee. DLee told us that his girlfriend (who I think is a model, although I didn’t want to ask) doesn’t know anything about basketball, so she asked him if she should buy a magazine or something to learn about the game. He said he told her to go out and get a SLAM magazine and maybe try to kind of study that.

She went out and bought a SLAM, but she accidentally bought SLAM presents Kicks instead of a regular issue of SLAM. She studied Kicks instead.

So, David Lee said, his girlfriend still knows nothing about basketball, but now she knows everything about the release date for the new Jordans and other shoes.