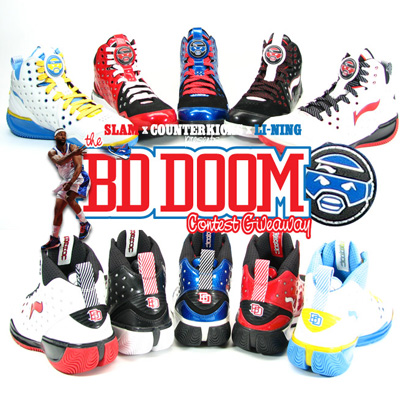 Baron Davis made waves in the fall of 2008 when he left Reebok to sign with Li-Ning. The Chinese-based sneaker and apparel company is set to release Davis’ second signature shoe on February 15. Li-Ning’s BD Doom will release in five different colorways and will be the shoe’s first US-based online launch.

Over the coming weeks, with the help of Li-Ning and Baron Davis, Counter Kicks wants to set some lucky readers up with these shoes. In the weeks leading up to the February 15 launch date, Counter Kicks will be giving pairs away. Here’s what you have to do:

Step 3) On Tuesday, January 26 and Wednesday, January 27, one winner for each day will be selected at random and announced on the @CounterKicks Twitter account.

Step 4) Reply back within 15 MINUTES if you see your name selected to get hooked up with Baron Davis’ new kicks. Alternate winner will be selected after the 15-minute time limit if there’s no response.

Step 5) Keep following @SLAMonline and @CounterKicks for the next contest launch.

Easy as that. Take advantage of this chance to get what have been up to this point some tough kicks to find in North America.