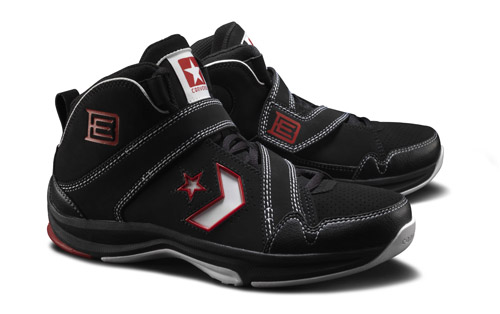 About 30 rotations of the earth ago, I trekked down to Philly to kick it with Elton Brand. Coming off a lost season and on the cusp of a new one, EB looked healthy, and came off as possessing the right frame of mind for the 09-10 Season.

As you read—or didn’t read—Elton and I talked ball, his future…and sneaks.

I can’t/don’t know what EB’s future holds, but I do know that his quest to redeem himself begins tonight against Orlando. I also know that he’s gonna be going full bore, the idea that he owes it to his fans and himself the impetus.

While on the court tonight, and for the remainder of the season, Brand will be wearing his second signature Converse kick, the EB2.

When I spoke with Brand, he was geeked about this shoe. Now you should be, too.

Thanks to Converse, we have two autographed pairs on ice in the vault. And we want YOU to have them!

Here’s what you have to do to win a pair: In 150 words or less, tell us what you appreciate most about Elton Brand’s game and why. (Is it his rebounding? Shot blocking? The way he uses his body to make up for his lack of height? Etc…)

We’re gonna close this contest on Monday and announce winners next Wednesday.