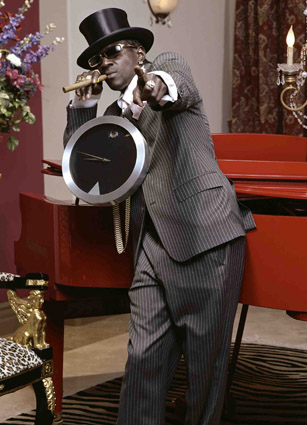 Flavor Flav has plenty of captivating stories. From his lengthy career as a member of seminal hip-hop group Public Enemy to his stints as a reality television star, the Long Island native has lived a vibrant 52 years. He details many of those experiences in the autobiography Flavor Flav: The Icon the Memoir. Recently, Flav stopped by the SLAM Dome, outfitted in an oversized Larry Bird jersey, to say what’s up.

SLAM: You know, since SLAM is a basketball magazine—

FF: What?! You ain’t got to tell me what SLAM is, ’cause I be getting SLAM. That’s one of my airplane books. I got a lot of SLAM books at my crib right now.

SLAM: We appreciate that, man. You’re rocking a Larry Bird jersey right now; was he your favorite player?

FF: No, he was just one of my favorite players. Besides Michael Jordan, because we all know that Michael Jordan is the best that ever touched a basketball ever in life. But my favorites, when I was coming up, were guys like Willis Reed, Bill Russell, Wilt Chamberlain, Moses Malone, Walt “Clyde” Frazier. Some of the greats.

SLAM: Were you a Knicks fan coming up?

SLAM: But you’re still willing to throw on a Larry Bird jersey?

SLAM: Have you gone to many Knicks games?

FF: Not many Knicks games, but I did go to one Knick game. There was one time when my friend Jack Hamilton took me to a game and the Knicks were playing the Heat, and toward the end of the game, I seen Alonzo Mourning. I’m good friends with his wife Tracy since way before she met Alonzo. So when I seen Alonzo, I went courtside to tell him to tell Tracy “hi” for me. And as I got up and walked down there, the whole game stopped. All the players from the Heat and the Knicks left the court [and] came to say what’s up to Flavor Flav. And the coaches was like, “Hey, what the hell are y’all doing? Y’all got a game going on here!” Wasn’t nobody listening to they coaches; they was coming to check they boy Flav out! It was an honor, though. It was a great feeling.

SLAM: Did you ever play much?

FF: Yeah, I played a lot of basketball back in my day. I never was a real live Meadowlark Lemon, but I used to get down and do my thing. And if you read my book, then you’ll find out that one of my favorite basketball moments was playing on the court with Michael Jordan and, luckily, I hit two points on him.

SLAM: Did he let you do that? Or you earned it?

FF: Oh, I earned that one! It was a luck shot. I threw up a luck shot on Michael. I went to the Chicago Athletic Center to play ball with R. Kelly—this is when Michael was leaving baseball, going back to basketball. And we all played at the Chicago Athletic Center. And we played two games against Michael and his boys. If you read my book, you’ll see that story in the book. But, hey, Michael Jordan was always one of my favorite people in life. Still is. I’ve had three experiences with Michael. There was a time when Michael Jordan hosted Saturday Night Live, and Public Enemy was on that show. Right with Jesse Jackson reading Green Eggs and Ham. Yeahhh, G!