1-1 splits but not for Washington 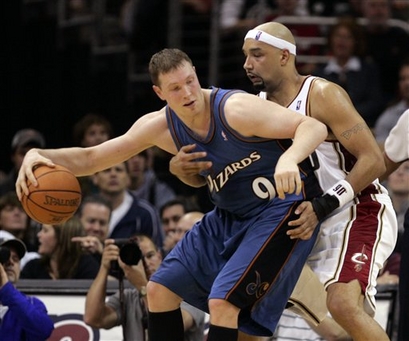 Thank you Baron Davis. Last night I just wanted to go to sleep and use my subconscious to try and figure out the latest LOST bombshell. Baron got himself tossed, and after a few minutes it was clear the game was over and I could call it a night. The very great news about the Dallas-Golden State series is that bad blood is boiling. Those types of playoff series are always the best. Who would have ever thought that emulating Tim Duncan could be so self-destructive?

The Cavs let the depleted Wizards hang around for too long, then after creating separation let them back in the game, while everybody on TV screams about how Cleveland needs to bury them and prove they are an elite team. Have you watched the Cavs this season? Other than Varejao, they only play hard when they think they absolutely have to. A big subplot of the season was waiting for LeBron to raise his game to the next level come playoff time. Thanks to the Washington injuries, he can keep it first gear a little bit longer and save his energy for stuff like this. Drew Gooden was on fire, and his hot shooting led to the following intro in the AP game story:

Once he dropped in his sixth straight jumper, Drew Gooden spun around and looked over at Cleveland’s bench. Then, he placed his hands in front of his face and wiggled his fingers.

Nice try Wizards. 31 and 10 from Jamison, but the shift to their home court and crowd on Saturday could end up being more depressing than helpful.

In the Nugs-Spurs game, Iverson went crazy with the game seemingly out of reach, and Duncan had to make one big shot to seal the deal. There will be more on this one from Cub, and of course Ben Collins and Jake should be checking in on their series too. Two too little comebacks and one meltdown last night. There are three games being played tonight, each one features a team coming back to its home floor down 2-0. Three must-wins. Good luck to all of them.

But seriously, the ending of LOST was bananas. There will be an intense discussion group at work today. (Not with SLAM people though. Other than Khalid, they don’t worship at the altar of the God that is LOST).