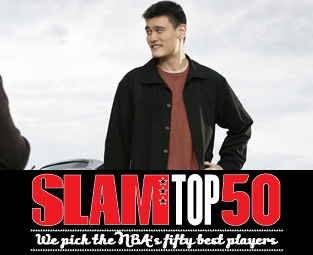 I used to hate Yao. Not personally just the way he played. I’m thinking if you’re 7’ 1000 or whatever he is that you should be banging on dudes and especially you yourself should not get banged on. The way he played bored and annoyed me. But he has showed some sings over the last year or so for me to start watching him. He was killing the last half of the season last year after coming back from injury and this summer he didn’t play in the WBC so he should be fresh and ready to play. I mean right now he’s the center you want on your team. Last year he averaged 22 and 10 and is poised for a breakout campaign this season.

He’s not “better” than Shaq per se, just younger and more hungry so he’s rated higher. He’s gonna be 1st team ALL-NBA (along with Kobe, LeBron, Nash and Duncan) and deservedly so. Most of us here in the States don’t know enough about the Chinese culture so we just labeled him soft. His social conditioning caused  him to frown on such things as trash talking and dunking but he’s learned enough to play that brand of ball now. He’s the key to that team not TMac. Yao is about to take over. You’ve been warned.