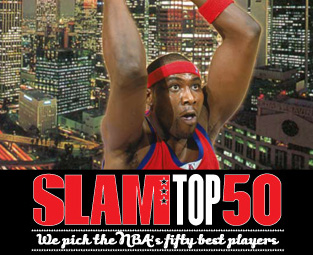 Excerpted from SLAM 93, by Elton Brand as told to Susan Price

When I first got to the League, it was so fast-paced. I got some tips from some of the hometown guys, the New York guys, like Anthony Mason. I talked to them in the summertime. Mason taught me how to work hard, how to be a power forward. It was a tough road at the beginning, really tough to get acclimated to the League. But once you do it, you kind of figure your way through it, like, I need to work on this, I need to work on that. He told me what I had to do if I wanted to be a good player. If not, then you could be out of the League. And I’ve seen that with former friends and former teammates.

My first year, I got to play with Ron [Artest] again on the Bulls. We played together in AAU. He was—and is—really competitive. We came right after the dynasty teams, and we had a tough time. We’d hear things, like ‘the HorriBulls.’ We were kind of young then…

In 2001, I found out I might get traded on Draft night. I talked to my agent that night and he said that Jerry Krause was looking to trade me, that he was fielding a lot of offers to trade me. He said, ‘Do you want me to try and block it? What do you want me to do?’ The two teams right then were the Washington Wizards, because they had the number one pick with Kwame Brown, and the Clippers had the number two pick. You know, I was a little intimidated, I’ll admit, going to Washington. I said I wanted to go to the Clippers, with Corey [Maggette], a college friend, and Lamar [Odom], an AAU friend from New York. I wanted to go. And it was L.A. I watched them beat Portland on TV that same year, and I was like, Man, they’re havin’ fun! Because I was with the Bulls and we won 17 games or something. The Clippers won 20 or 30-something. And they were having fun. I was like, Man, that’d be cool to be there. So I told him, I actually told him I wanted to go there, and he was like, ‘What? Not there! They don’t pay.’ He tried to talk me out of it a little bit, but I didn’t care. I said, We’ll deal with that when it comes to that.

My first year with the Clippers, we actually did pretty well. We were in sixth place during the All-Star break. That’s when Karl Malone was with Utah. You know, the West was still pretty strong. We had our own TV show on ESPN. I made the All-Star Game my first year with the Clippers. We were on the cover of SLAM—me, Darius and Lamar. We were winning a lot of games and we just imploded at the end. It was tough. We had nine guys not under contract, we had about six guys that were considered max players from the media, their friends and everybody else, so that kind of hurt us. It was tough.
This Clippers team, though, is great. There’s definitely a big difference from a year or two ago. We have a more veteran-laden team now, with Cuttino and Sam and Corey. And I’m 26. I’ve been around! The rookies know we need our rest. That’s how it is when you get older [laughs].

There’s all this talk about us and the Lakers, being in the same town, how we’re now the best team in L.A. As for the Lakers, it gets a little taxing, all the comparisons, ’cause we don’t care. They definitely have the tradition, the heritage. You can’t take that away from them. I compare it to New York. Growing up in Westchester, I have some friends that are die-hard Knick fans. They are die-hard Knick fans, Clippers fans second, but die-hard Knick fans. So when the Nets, no matter how exciting they are if they move to Brooklyn, until they establish themselves as a New York team and win some championships, they’ll always be the second New York team. You know, it’s been a while for the Knicks, too, but they won’t have that problem ’cause they have the championships.

There’s some discussion about the MVP right now. It doesn’t bother me that people are talking about me now, even though my numbers are pretty much the same as they’ve been. Not at all. I learned early that you get the individual with team success. Of course you have to pay your dues. My rookie year, I averaged 20 and 10, won co-Rookie of the Year, but Dale Davis got the All-Star nod averaging 9 and 8, playing in Indiana. Numbers-wise, it didn’t make sense, but his team was in first place, so I understood early that your team has to win.