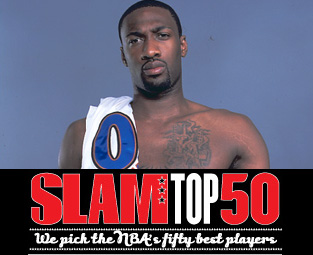 If you didn’t know that Gilbert was whatever you want to call him, whether it’s quirky, enigmatic, normal in a crazy world, insane, brilliant in a stupid world, then you know now. This summer has brought us one piece after another about his persona, which is, let’s say different from what you expect from an NBA player. He’s won over alot of people’s hearts this summer because of any number of factoids about him, all of which paint the picture of the most unique personality in the league. Basketball-wise here are the facts: Of the four players that were scoring about 30 per game last year, Gilbert was the only one on a team with anything resembling balance. He doesn’t play defense and he has other guys on his team that can score and play their roles so all he has to worry about is offense, where he dominates. Now, since this was the summer of Gilbert in the media, we’ll step aside and you can re-read about his various eccentricities or whatever term you prefer to label him so he doesn’t get offended.

The more sobering Mike Wise article that Lang linked to this morning.

Our Starting 5 with audio.

Behind the scenes of our KICKS cover shoot. Gilbert was there.