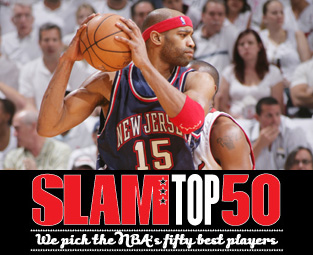 It’s hard to fathom now because he’s the most important player on my favorite team, but it wasn’t even two years ago when Vince Carter received an angry letter from an old friend on The Links.

I know you don’t have very much appreciation for me. I’ve always wanted to chill, but you remain at a distance, scoping out the scene from the perimeter. We’ve had our moments, but haven’t recently built the bond that you need to sustain true superstardom in this league. I hope you consider me in your future basketball related endeavors, even though they probably won’t be in the T Dot. The best things in life are free, but you must first make sacrifices.

P.S. – Just to dispel any hatorade conspiracy theories regarding this letter, Austin Croshere has been to the line more than you this season.

Vince went from averaging 3.6 free throw attempts a game before the trade to 6.8 attempts after the trade, to 7.6 attempts last season. I’m not telling you he desperately wanted out and stopped trying on purpose, I’m just saying…

Just saying aside, Vince Carter’s recent career trajectory provides us with an appropriate gravity-related analogy. What jumps up must come down. More importantly, what comes down must elevate again in order to reach its potential.

Since his arrival in the Swamp, VC has done just that: re-launch. As the focal point of Lil’ Lawrence Frank’s offense, Carter has excelled for most of his brief tenure in Jersey, teaming with Jason Kidd and Richard Jefferson to place the Nets back on their proper perch atop the lost division of Atlantis.

When he’s on his game, Carter is among the most talented 1 on 1 forces in the NBA, a perfect mix of style and substance. He boasts the ability to rise up and nail any jumper from any spot on the floor over anyone at his position at any degree of fade. He dances past defenders into the lane with remarkable ease and still jumps out of the building.

A few other things to consider:

All that said, Vince Carter is in a contract year.

You should probably just get the hell out of the way.