Were Those the Days? 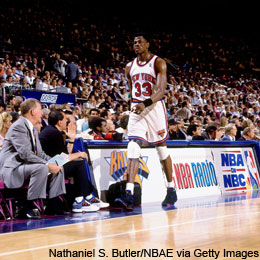 I live in New York. I love New York and I obviously love basketball, so I know the significance of the city and its history with the game.

And like any good sports fan, I watch the local team’s biased TV network. So, I’ve been following the coverage MSG has been giving the ‘93-94 Knicks, which SLAMonline has documented in its thorough series (Part 1, Part 2) on the team. I’m a new contributor here, but I have to provide a counterpoint to their exploration of the ‘93-94 team. And that counterpoint is that the ’93-94 Knicks were not great.

The ’93-94 Knicks are a symbol. They represent a fact that might seem like basketball sacrilege; and that fact is that the Knicks are not a great basketball franchise. I’m a child of the 1990s (born in 1985) so I love the Chicago Bulls like any person loves the icons from their youth.

The Bulls were more than a team, they were reality—they pervaded the world in every way. But by geography I was a Philadelphia 76ers fan. I lived outside of Philly until I was almost 10, so my sports allegiances were firmly formed in that working class city.

The Sixers and Knicks are actually very similar but little compared franchises. They are both historical franchises with iconic players (Wilt, Billy Cunningham, Mo Cheeks, Dr. J, Barkley, Iverson, Ewing, Walt Frazier, Willis Reed, Bill Bradley, Bernard King); they both have knowledge fans; and they each have fewer championships than you’d expect (Sixers have three, Knicks have two).

The Sixers have collectively had more years of futility than the Knicks, but at this point, each franchise has shared the same level of embarrassment. They even both had a team that all the fans loved, but made it to the Finals and lost—the 2001 Sixers and the 1994 Knicks.

The ’91-92 team had nearly shocked the world by beating up the Bulls and pushing them to the limit in the Eastern Conference Semifinals. By standing tough in that series, the Knicks announced their presence as a new force to the basketball universe.

In ’92-93 they took the next step forward and seemed primed to win a Championship, but because they lost to the Jordan-led Bulls—again—in the Conference Finals, we don’t remember them. That was just an unfortunate truth for many teams and players in the Jordan era—eventually you were going to lose to Michael. Yet, why do we remember the ’93-94 team when they still didn’t win the Championship?

The ’93-94 Knicks were looked to as the team to fill the void in a Jordan-less NBA. Anything less than a Championship would be a disappointment. Ewing had another great season, but the team went through difficulties with injuries to Starks and Doc Rivers and trying to fit Derek Harper in as a replacement and Riley tried to find extra minutes for Anthony Mason.

Watching the games from ’93-94, Harper and Mason stand out as the largest disappointments to me. Harper was not nearly as good as everyone remembers him being, even in the latter stages of the season, and Mason just seems like a dated player. When you look at that Knicks roster, frontcourt names like Mason, Oakley, Smith and Ewing stand out, but that is all on paper—a record of a team that played 20 years ago. And while they were tough and physical, and in Oakley’s case extremely savvy, they weren’t all that great.

What doesn’t sit right with me about this celebration of the ’93-94 Knicks team boils down to the fact that it’s some exaggerated memory of its greatness. They were an above-average team that was able to succeed in a league that was devoid of its greatest player.

Sure, I know that this celebration is primarily based on a local New York sports channel, but it still bothers me. The Knicks couldn’t make it to the Finals when Jordan was in the League. Then he leaves and they have a good, but not great season, get pushed to the brink by an overachieving Bulls team with Scottie as the leader and then are almost upset by an upstart Pacers team.

They actually make it to the Finals only because of Michael’s absence and lose to a Rockets team that might be one of the worst Championship teams of all time (I know, I know. Hakeem was amazing, Horry was clutch and Cassell and Kenny Smith with charming, but still) in an NBA Finals that was one of the most poorly played Finals of all time, marked by John Starks’ awful Game 7 performance. This does not sound like a team to celebrate.

Yet, when I talk to my friends who are Knicks fans, they all celebrate the ’93-94 Knicks. They talk about Mason, Oakley and Harper in reverential tones. Now, I know fans of certain franchises love a specific year’s team due to their ability to overcome adversity, fight against the odds and overachieve (2001 Sixers, 2007 Warriors, 2009 Celtics post-Garnett injury), yet still fall short. These teams might not be glamorous or successful, but they reach a certain place in your fan’s heart and stay there.

I am forever baffled by the ’93-94 Knicks and the out-pouring of love and memory they receive. Especially for a franchise and city that is supposed to be basketball royalty. Maybe I’m biased against the Knicks. Maybe I’m just mad I can’t afford NBA TV so that I can watch their classic games instead of this MSG love-fest.

Either way, when I think of the ’93-94 Knicks or see their old games on TV, I’m baffled. But then, I’m not a Knicks fan, so I don’t know the disappointment and the pain of the 1995 Playoffs and “The Finger Roll” or anything that came after.

For any Knicks fan, the excitement was never greater than in ’93-94. So maybe that’s why the fans loved them so much, but it still doesn’t make them a great team.