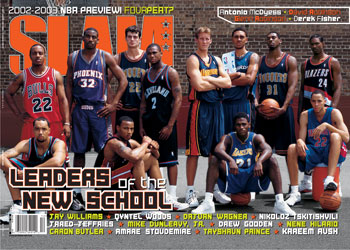 To paraphrase the immortal Phife Dawg, “go get yourself some toilet paper ‘cause this draft year is butt.” Excuse the toilet humor and the tasteless pun, but this doesn’t mean that the talent level of the 2002 draft was crappy. On the contrary, it contained franchise-altering talent. But all of this talent came with a caveat. Yao Ming’s size and skill level combination is unheard of but he can’t stay healthy and might be done for good. Jay Williams had a promising rookie season for Chicago but his motorcycle (and his hoops career) crashed at age 22. Amar’e Stoudemire is one of the most offensively explosive big men the League has seen in years but he can’t play defense and is snakebitten with injuries.

So, now you see why the 2002 Draft was the year of the “but.” Feel free to insert your own lower-extremity joke here.

Yao Ming has been the impact player (both on the cour

t and in the financial ledgers) that the Rockets and the NBA had hoped for. But he missed an average of 23 games per season (not including playoffs) over the past four years and his latest injury will keep him out at the very least all of next season. Time for Houston to cut their losses.

Concerns over Stoudemire’s inability to stick at one high school and unstable family life allowed him to slide to the Suns at pick No. 9. While he hasn’t shown the ability to dominate on the defensive end, his offensive talents are among the best the NBA has seen in years. Jay Williams, meanwhile, enjoyed riding motorcycles.

Guys that can get you 20 and 10 aren’t normally around at pick no. 34, but Carlos Boozer was for Cleveland in 2002. Unfortunately they couldn’t keep him around. Meanwhile, Mikey Jr. combined with Jay Williams for back-to-back Duke busts.

Caron Butler is about as well rounded as you can get – he’s third in the 2002 draft class in career scoring, fifth in rebounding and first in assists. Unfortunately the Wizards injury malaise is contagious, and he has missed a minimum of 15 games per season over the past three years.

uilt the same. While Tskitishvili was an enormous flop, Tayshaun Prince was a steal at pick No. 23 for Detroit. A both end of the floor threat, his stick man physique has been surprisingly durable—he hasn’t missed a game in the past six years.

Health problems derailed Wagner’s promising career before he was barely in his twenties. Scola is the total opposite—after starring overseas for years he is finally getting the chance to do the same in the NBA in his late twenties.

After serious health and injury problems, the man formerly known as Nene Hilario had a career year last season in Denver—something the Nuggets will need again from him this upcoming season if they plan on competing out west.

Maybe it was a little harsh calling Mike Dunvealy Jr. a bust earlier. He did have an outstanding ’07-08 season before losing most of last season after blowing his knee out.

You’d think a young, athletic big man like Gooden would be someone a team would want to keep around for awhile. Instead, next season in Dallas will be his seventh team in eight seasons.

John Salmons appears to be peaking as he creeps toward his 30th birthday. If he keeps it up, the next time this draft class gets remixed he’ll find his name closer to the top.

Read more of Jeff Fox at The Hoops Manifesto.