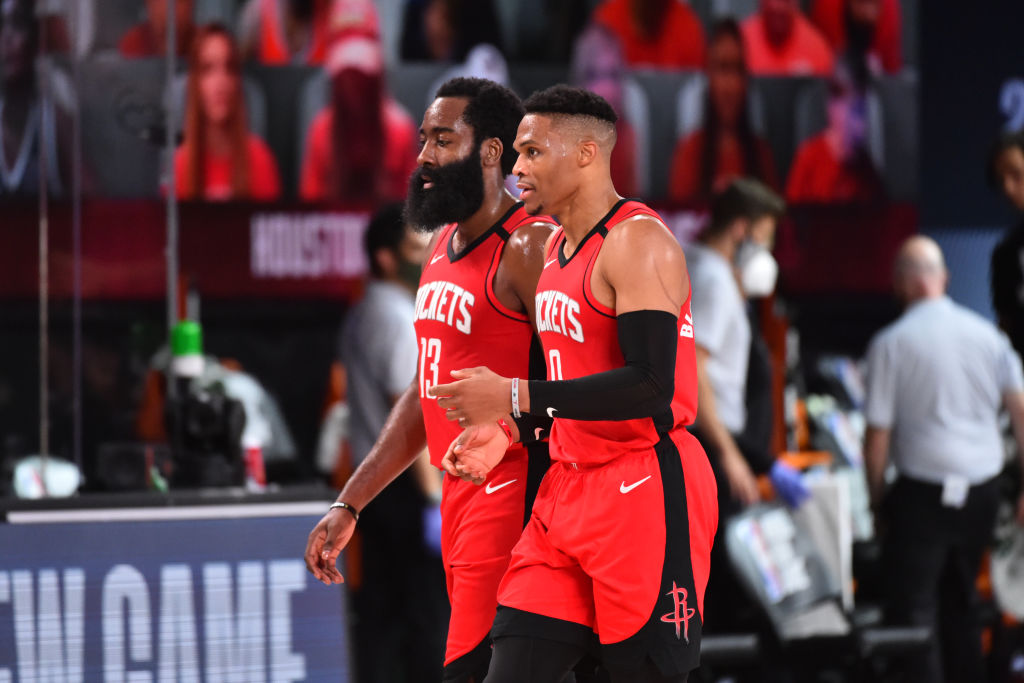 Unlike in the Eastern Conference, first-round matchups in the Western Conference were highly competitive. No team was swept and there were two series that came down to the last seconds of a Game 7.

This brings us to the second round, where every single game will feature a handful of NBA superstars. Only four teams remain out West with hopes of getting one step closer to the 2020 NBA Finals.

Let’s dive into both of these upcoming matchups in the Western Conference. If you want, you can check out our Eastern Conference Round 2 Preview, too.

The Lakers really haven’t looked like what we expected them to in the playoffs. After finishing the regular season with the best record in the Western Conference, they looked rough on offense in the seeding games and then most of their first-round series despite beating the Portland Trail Blazers in five games.

If this continues, the Rockets will be in a good situation. As a team that shoots threes unlike any team we have ever seen, Houston scores the ball at a high level. If the Lakers come out flat offensively, it will be hard to keep up with the scoring of the Rockets.

Against the Trail Blazers in the first round, LeBron James made everything happen for the team offensively, averaging a triple-double. His 27.4 points, 10.2 assists, and 10.2 rebounds per game while shooting .600 from the floor and .464 from deep has made him one of the most efficient players in the playoffs. Anthony Davis added another 29.8 points and 9.4 rebounds per contest in the first round, but outside of that the Lakers really struggled to score.

As good as James Harden’s numbers look, he had games in the first round that were slow on that end of the floor, especially Game 7 in which he finished with only 17 points. Russell Westbrook certainly had his own flaws in the three games against the Thunder in Round 1 but he should be able to turn things around as he shakes off rust and continues to recover from his quadriceps injury.

Defensively, the small ball Rockets will be facing an entirely different situation with the Lakers than they did the Thunder. LeBron James is obviously a mismatch nightmare but another player who has a great chance to shine in this series is Anthony Davis. Houston did a pretty good job of managing Steven Adams in their first-round series but Davis is at another level. With his ability to space the floor as well as score in the mid-range and the paint, the Rockets will have to limit his production to be successful.

One thing to watch for is how the Lakers come out early in Game 1 after being off for nearly a full week. At what point does being away from playing NBA minutes hurt them? Sure, having everyone healthy and fresh is great but as a collective unit this team hasn’t been great in the playoffs. Of any team that might have needed a longer first-round series to work out their issues, it’s the Lakers. It will be interesting to see how they come out against a Rockets team that had only one day of rest between their first two series.

This series probably comes down to the guys who aren’t superstars. We know James, Davis, Harden and Westbrook will be excellent. What will swing the series is how the supporting cast of each team comes to play.

The Los Angeles Clippers beat the Dallas Mavericks in six games in their first-round series. Although that sounds great, for the most part it wasn’t pretty. The Denver Nuggets, on the other hand, stormed back from down 3-1 to the Utah Jazz and won the series in Game 7.

For the Clippers, Kawhi Leonard really has been the only consistent piece on offense. Paul George, who the the team will rely heavily on throughout the playoffs, played extremely poor the majority of their opening series. While this was manageable for a first-round series against the Mavericks, he will need to rise to the occasion against the Nuggets. Additionally, Lou Williams was streaky and had some less than impressive games, as well as Montrezl Harrell who seemed to take a while to get back into the swing of things after being away from the bubble.

The Nuggets, who have looked great as of late, have a blooming superstar in Jamal Murray. He poured in 221 points in their opening series while shooting .533 from deep. Denver also got solid play from Nikola Jokic, Michael Porter Jr. and Jerami Grant. As a team, they shot .421 from beyond the arc, second best of any playoff team. Their offense seemed to only run through Murray and Jokic for the most part but it was certainly clicking.

The Nuggets and Clippers matched up three times in the regular season, with the Clippers winning the season series 2-1. After coming back in their opening playoff matchup, the Nuggets have won three straight games. While this means they are hot and have momentum, it’s also fair to say that fatigue may be an issue. They will only get one day off between Game 7 of their opening series and Game 1 of their upcoming series. On the flip side, the Clippers finished their series earlier and have had a handful of days to rest, recover and get prepared.

The defense of the Clippers is one of the best in the league. They are well equipped to guard guys like Murray and Porter Jr. with the duo of excellent perimeter defenders on the roster in George and Leonard. Denver on the other hand posted the third-worst first round defensive rating of any playoff team. With the amount of offensive weapons the Clippers can throw at you, Denver will need to tighten up that defense if they want to make this a series. The Clippers are the better team in this series but will need to play their brand of basketball to advance to the Western Conference Finals.