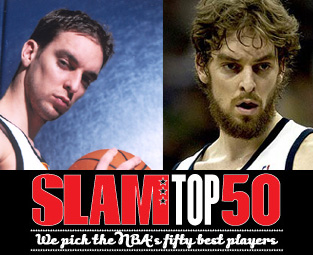 Finding someone to write about the Grizzlies isn’t easy. Just ask Truehoop. On top of that, Pau Gasol has had a strange career. He was rookie of the year from out of nowhere, he puts up great numbers, but he’s never won a playoff game. He was the best player in the FIBA World Championships, but his country won the final game without him. He used to get made fun of for being a metrosexual, so he went the oher way and now he’s got a hipster/homeless beard. We tried to reach out to the world’s #1 Pau Gasol fan, everyone’s favorite commenter TrippleX, but it turns out that the email address he’s been logging in with is a fake! Imagine that. Either that or there’s some kind of technical problem. So, we’re forced to use some of his greatest hits as a commenter for the Pau write-up. TrippleX, why don’t you elaborate further in the comments.
TrippleX’s greatest hits:
Pau was the MVP of the WBC!

I must admit, its awfully hard to put gasol over wade and lebron. but like i said, these guys are all WINNERS and LEADERS!

i forgot all about wade and lebron. i gues they are better than gasol and ak47.

Heres my top 5: Nash, AK47, Gasol, Dirk and Kobe. BTW this is not biased. All of the above mentioned players are WINNERS not ballhogs like lebron and wade.

Pau was the MVP of the WBC! So like I said before, hate it or love. I honestly couldnt give a damn. Thanks to all the Tripple X (Vin Diesel) supporters. Haha.

Tripple, we’re waiting for you to add on…