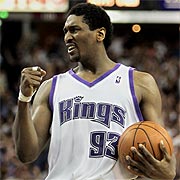 Ron Ron. He could be the league MVP and Defensive Player of the Year, or he might just go AWOL and retire. You never know. He’s on this list because he is an NBA superstar in his prime, and arguably the best two way player in the game. There have been great defenders in NBA history, but very few that put fear in the heart of the man they are guarding. On defense, Ron can lock down almost any perimeter player in the league and still foul a guy going to the hoop like he’s Charles Oakley. He intimidates like a shot blocker, guys are scared to go against him, and he uses that to his advantage. Ray Allen can whine about Bruce Bowen’s defense, but Ray can’t complain about Ron or he’ll kill him.

If you’re a fringe player that’s lucky to be on an NBA roster, you have to go all out every night. The superstars for the most part, get by on their talent. Not Ron Ron. He plays too hard for a star player. It’s yet another piece of the puzzle that Ron can play harder than anyone else, be the most basketball-obsessed player out there, and yet he needs to take time off during the regular season to promote his album. That’s what you might call predictably unpredictable.

When placing Ron on a list of best players, you have to look at the big picture. Amare for example, could have been #1 on the list, but his knees won’t allow that. By the same logic, Ron drops down a bit because he’s just as likely to miss 50 games as someone like Baron Davis. On paper, he turns any team he plays for into the type of team that can make noise in the playoffs. He made the Sacramento Kings tough! Then again, David Stern will suspend him at the first sign of trouble, such as in game 2 of the first round against the Spurs last year. And with the new rules about complaining to refs and players being on their best behavior at all times, well… let’s just say that the NBA is moving away from Ron Artest’s personality type – a move that began when Ron made friends with the Pistons fans a few years ago.

Also, I would just like to mention that Ron Artest is the only player in the NBA that doesn’t palm/carry/travel with every dribble. He pounds the ball and always stays completely upright. It looks weird, but it seems to work, cause he can score 20 like it’s nothing. Hopefully he plays a full season.