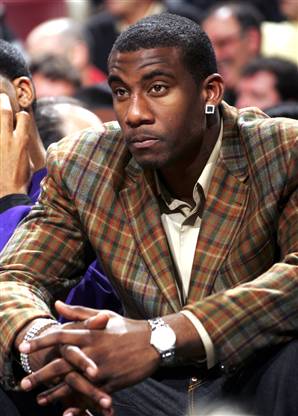 At his very best, Amare Stoudemire is in the business of making people very ugly. Don’t believe me? Just ask Stephon Marbury after his former teammate a-da-monthed Michael Olowokandi in his rookie year. STAT’s freakish athleticism is so mind blowing that it’s hard to control one’s reactions—be they verbal or physical—when watching him play: You yelp, you scrunch your face, but most of all you just shake your head in bewildered amazement. He is Shawn Kemp, Darryl Dawkins and a young Karl Malone all rolled into one.

Imagine if both of his knees were healthy.

Could he be considered the greatest power forward of all time when it’s all said and done? I’ll let his stats (37pts, 9.8rbs, 55 FG%) in the 2005 Western Conference Finals, against a surefire Hall of Famer (Tim Duncan) no less, answer that question. He accomplished that in only his third year in the League, at the tender age of 22, relying mostly on raw athleticism and an iffy jumpshot.

In the last year, Amare has seen a drastic change in fortunes. Matter of fact, nothing has gone right for him: He had trouble with both of his knees (arthroscopic surgery was performed on the right knee, while the left one faced that scary microfracture cut-up); his mother ran into serious legal problems; and his team, the Phoenix Suns, didn’t miss a beat without his services last season (advancing all the way to the Western Conference Finals).

The list of players who were robbed of all but assured greatness by injuries (most of them to the knees) is long as it is depressing: Grant Hill, Penny Hardaway, Chris Webber, Allan Houston, Jamal Mashburn … With each passing day, a similar fate seems to be awaiting the gifted Stoudemire. Last season, he missed all but three games, and already this summer there has been talk of continuous knee trouble. Can he return to the dominant and unstoppable force he was pre-surgery? Every basketball fan should hope so.

But you know what the crazy thing is? Even if Amare doesn’t make a full recovery, his absence from the NBA won’t be as devastating as you may think (at least not to those without a vested interest in the Phoenix Suns). That’s how awesome the talent level in the Association is right now. We’ve got Wade, ‘Bron, ‘Melo, Howard, Paul, Oden, and a slew of others to hold us down for the next 15-20 years; we’re living in a golden age of hoops. It’d be a shame if one of its brightest and most promising talents weren’t able to fully enjoy it.