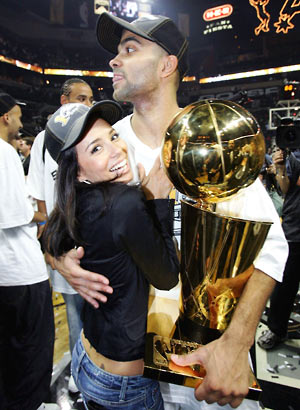 The first time I met TP, he was only 15 years old. Tony was the starting point guard of INSEP, a basketball team in France, and the kid was already murdering veteran players with his blazing speed and superior playmaking skills. While he was a promising young player, he didn’t get much buzz in Europe, and some NBA scouts had high school players like Andre Barrett and Omar Cook way ahead of him.

But Parker didn’t care. He was dreaming big and every time we talked basketball, he was asking me questions about the League: Iverson, Marbury, Kidd. “Tell me about Allen,” Tony would ask. “Is he that quick? How good is he? I don’t want to be like him, though I know I can score. Me, I want to become a true point guard. I really just want to help my team win…”

Did he ever. Looking at him now, nine years after I first saw him, it’s kind of scary. He is still murdering people, only now it’s not in a sub-par French pro basketball division but in the NBA. A regular at the Hollywood parties, thanks to sweetheart Eva Longoria, Tony has become a popular icon worldwide. Paparazzi loves him and he is now recognized as one of the most exciting point guards in the NBA.

And now, with Tony starting to shoot the ball like a sniper, the best is yet to come. Is there anything this kid can’t do?

Well…you know I love you Tony, and you’re my man, but how about stopping that rap thing? Really…