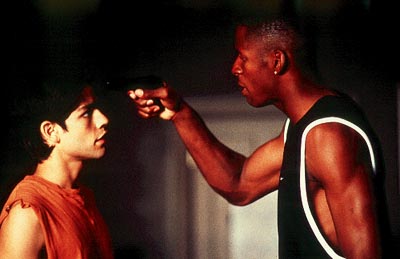 Ah, Ray Allen. Could be lower, could be higher, but right in the middle seems just about right somehow.

I wrote the following back in 2003 for our annual Kicks magazine, and after re-reading it this morning, it seems almost perfectly applicable still today…

He had a dream. And so Santiago, the Andalusian shepard boy, woke up that next morning and jetted, leaving Spain, going through Morocco in search of Egypt, to find the pyramids that house the treasure he had dreamed of. Along the way, Santiago learns about alchemists, the men in ancient times who spent their entire lives trying in vain to turn various metals into gold. But above all else, Santiago learns that the most important thing in life is following his dreams.

The above story is not about Ray Allen, not exactly, but it is Ray Allen’s favorite story. Santiago’s tale is spelled out in Paulo Coelho’s *The Alchemist: A Fable About Following Your Dreams*, which was a best seller in Latin America and has snaked its way onto American best-seller lists. Ray Allen read it, and something about it resonated with him, so much so that he bought a couple dozen copies of it and passed them out to all his Milwaukee Bucks teammates. That was before the Bucks decided that having a guy that can score 20 a night with his eyes closed, represent the franchise like an ambassador and speak to the media intelligently and honestly was less important than having Gary Payton for three months.

In a way, you can see why Ray Allen would relate to The Alchemist. As a kid, Ray spent his life on the move, a military brat (his Dad was a welder in the Air Force), bouncing around from bases in California to Germany to Oklahoma to England to Cali (again), before finally making a perfect landing in Dalzell, South Carolina, just in time to play four years at Hillcrest High School, taking the state title his senior year. He was not your typical small town star, the kid that wears his letter jacket with the collar flipped up and rides down main street with the top dropped on his Mustang. Biological bothered in this case, keeping an eye on Ray and keeping him out of trouble, making him take a job when he was just 15 as a dishwasher at a local steakhouse, stranding him elbow deep in Palmolive for hours on end.

It had to leave him clean, which may explain where that jumper, that otherworldly jumper, his too-clean jump shot comes from. Whether he’s five feet or twenty-five feet out, he jumps as if he’s going up for a dunk, at least 18 inches into the air. The ball rests gently in his right hand, his index finger centered, perfectly in line with the air valve. His right arm is cocked, a perfect 45 degree angle ready to be measured with a protractor. His left hand is there, too, guarding the ball without affecting the positioning or grip. When he reaches his apex, the right wrist, as strong as that of Hank Aaron, gives an easy flip, tossing the ball not near the rim or toward the basket, but dead at the center of net. It’s the kind of jump shot that TNT analysts like to claim won’t work in three-point contests — “Too much legs,” Danny Ainge or Doug Collins would say. “He’s going to tire out quickly.” — until Ray won the 2001 Three Point Shootout. It’s the kind of jump shot that makes James Naismith, if only briefly, stop spinning the spinning in his grave thanks to what his game has too often become.

A jump shot like that belong coming off of picks and screens, jacking up shots until his calves fall off. But at UConn, remember, Ray Allen ran the point, where he controlled his team but also managed to get his share of jumpers. He’d gone to UConn, in many ways, to escape from his parents. Not that he didn’t love them, but perhaps because he loved them too much. Eighteen years of respect and of that love needed a rest, and when you’re in South Carolina, Connecticut’s about as far away as you can get.

He excelled at UConn, setting offensive records and busting his ass in the classroom, too. (He had a 3.6 g.p.a. when he left after his junior year.) Eventually, there was nothing left to prove. He was first-team All-American, coming off an unbelievable 32-3 record, and, well, it was just time to go.

1996 was the year that he first stepped into the L, actually getting drafted by Minnesota at the five spot. Minutes later, Bucks GM Mike Dunleavy swapped the fourth pick, Stephon Marbury, for Ray. When the move was announced, the fans in Milwaukee, already excited about the possibility of Steph playing with the Big Dog, Glenn Robinson, didn’t just boo the move; they actually gave it a standing boovation.

He got them back though. For his first five seasons, he didn’t miss a game, starting off averaging 13.4 points per game, then 19.5, 17.1. He re-upped with a maximum contract, then put up 22.1, 22, 21.8 and 21.3. The Bucks had issues, though, never really figuring out how to use Ray alongside Glenn Robinson and Sam Cassell (and, later, Tim Thomas) while maximizing their wins but minimizing their egos. He preformed well on the court, and was just as impressive off of it. As the only Bucks player to live in Milwaukee year-round, he took an interest in the city, suggesting ways to revitalize the sagging downtown, becoming the League’s spokesman for the Thurgood Marshall Scholarship fund, serving on the council for the Jr. NBA and Jr. WNBA (“I’m the shooting guard for the Milwaukee Bucks.”), getting involved in the NBA’s “TeamUp” program and even starting a charity back in Storrs, Conn.

Throughout it all, Ray wore Air Jordans, and during the era when MJ was sitting it out, watching the Bulls implode, Ray was the Brand’s highest-profile endorser, which, honestly, always felt kind of odd. Michael Jordan was, of course, dynamic beyond belief, the kind of player that we will never see again, viciously dunking on people and endorsing any product that would pony up the dough — which is exactly what Ray Allen never seemed to be. Even Ray’s one foray into the world of international commerce, his surprisingly nuanced star turn in Spike “TV” Lee’s *He Got Game*, despite good reviews, never really *felt* right.

Yet Ray Allen has also represented, quietly, everything Michael Jordan’s pro career stood for — hustle, excellence, and above all else, a game that earned respect. Like Mike, Ray seemed like the kind of player that would stay in one city throughout his pro career. But unlike Mike, the Bucks were never Ray Allen’s team. He was always expected to share star billing with the Big Dog and Cassell, and he did so dutifully for a while. But the Bucks, for whatever reason, couldn’t break through the Eastern Conference matrix into the NBA Finals.

Things finally broke down a year ago, just after Bucks coach George Karl publicly melted down (and admitted he always goes commando) in Esquire magazine. The Bucks moved Big Dog to the Hawks for MJ’s old waiter, Toni Kukoc, and then let Ray and Sam Cassell try and run their show. Ray did his usual thing — 21.3 ppg, 3.5 assists per, 4.6 boards — but when the trade deadline came around, the Bucks snuck up on everyone and swapped Ray to Seattle for Gary Payton. Though Payton is undeniably one of the best players in the NBA, and he had good history with Karl, his coach back in the day in Seattle, he’d made noise about finding a contender when his contract was up. With Ray locked down through the 2004-05 season, Seattle got their sure thing, a player that will move the crowd and make a difference. Milwaukee got Gary Payton for three months, a first-round playoff exit and, as it turned out, traded a four-time All-Star and one-time gold medalist for Desmond Mason.

Ray Allen will spend this summer playing in the Olympic qualifying tournament for Team U.S.A., then head back to Seattle, where *his* team, the Seattle Supersonics, will get ready for a run in the toughest sports Conference in the world. We won’t say that the Sonics won’t win a ring this year, but it will be close to impossible. They will have to suffer, but somewhere along the line, they will face a moment, and in that moment, they will flirt with their shot at eternity.

Toward the end of *The Alchemist*, Santiago meets an actual alchemist. “My heart is afraid that it will have to suffer,” Santiago tells the alchemist.

“Tell your heart,” counters the alchemist, “that the fear of suffering is worse than the suffering itself. And that no heart has ever suffered when it goes in search of its dreams…”
Update: 3 years later and nothing has changed, except the trade for Payton was lopsided as predicted, Ray spent last season setting the record for three pointers made in a season, and yes that photo above is of Ray holding a gun to Vincent Chase’s head. Don’t ask.