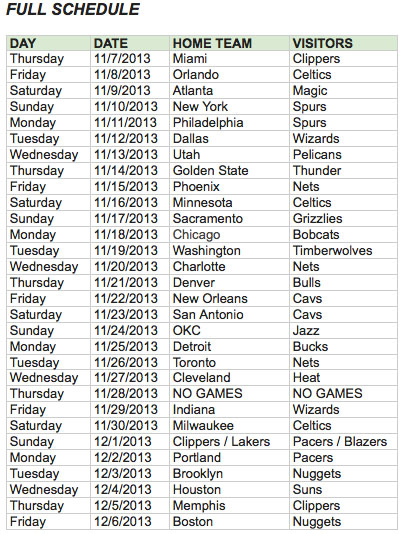 Thirty days. Thirty games. Thirty-thousand miles. And every NBA arena in between.

That’s how my schedule shakes out from today through December 6. Which, most likely, begs the obvious question: What would possess a man to embark on such an adventure?

An unquenchable love for the game, and going to games? Absolutely. A penchant for travel? Sure, that applies too.

But it’s more than that.

It’s about a challenge, and a stamp. Not your everyday, quasi-obsolete, perforated postage stamp. I’m talking about the All NBA arenas challenge stamp.

You see, last week Kyle Whelliston and I launched a tool called Basketball Passport, which lets NBA and college hoops fans record where they’ve been, where they’re at and where they’re going.

Part of the “where they’re going” equation includes arena challenges. If you complete a challenge—categorized by state, division, conference and league—you earn a digital stamp for your Passport.

Of course, Basketball Passport does more than that: It lets you create your arena bucket list, plan a road trip, check-in at the arena, share your memories and track every NBA and college basketball game you’ve attended back to 1980. It’s essentially your virtual shoebox of ticket stubs.

As an ambassador for Basketball Passport, I’m here to document my journey toward the holy grail: Seeing a game at all 29 NBA arenas (Staples Center twice to witness both the Lakers and Clippers hold home court) and claiming the highly coveted stamp.

Each week for the next four weeks, I’ll drop by to provide a first-person point of view of life on the road, in the air and inside the arena. You’re in for a treat as I have two things going against me:

1. I’m terrible at travel planning, and

2. Whoever designed the NBA schedule never considered the nut job trying to conquer this quest. Translation: There are a lot of wacky flights and drives.

That’s all for now. First stop: Miami. Feel free to send a tweet (@bbpassport) or use the hashtag #30in30trip. I’ll respond. And if you see me at the arena, say hello. I come bearing gifts. Just don’t forget to check-in on Basketball Passport while you’re there.