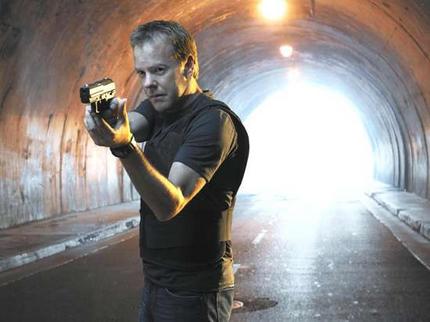 So I walk back into the office this afternoon straight off an 8-hour flight, after a long weekend away over in Europe, and immediately Sam starts asking me if I saw the new season of “24” the last two nights. I did not, I told him, adding that he better not say a word about them to me. And neither should you guys. Anyone mentions 24 in the comments, I’m sending Sam over to your house to talk your ear off about the new episodes. I’ll watch them tonight and catch up on whatever I’ve missed. Otherwise, keep it to yourself.

Spend the weekend in Paris with Wifey and my parents and in-laws. Wifey and I gave the trip to our parents for Christmas, and we spent five days over there, seeing the sights, strolling around. And I went to the PSG/Valenciennes match and saw PSG lose badly enough to get their coach fired the next day. The SLAM curse travels overseas!

And what did I miss here? Besides “24”? Well, only the biggest news in months: Stephon Marbury’s TV show has a home! What do we know about the show?
WHO: Stephon Marbury, Kobe Bryant, Mark Cuban, Isiah Thomas, and more guests to come.
WHAT: “Stars On Stars,” Steph’s talk show where he chats with other celebrities about life, sports and how much cheaper his shoes are than theirs.
WHEN: This is my favorite part of the story. According the NY Post’s “exclusive” story…

First, no mention that Fox owns the New York Post. Second, love that they have an idea of when the show might possibly air, and that idea includes a precise date and time. Now I just have to figure out to get a guest slot on there with me and my dog (and my dawg).

In other TV news, Linkstigator Dean sent along a note that the new season of “Pro’s vs. Joe’s” will feature, among other former NBA stars, Rik Smits. I knew my man Kevin Willis was going to be on there, but Rik Smits adds an entirely new depth of character to the program. I wanted to like last season’s show, but it was all glitzy and shiny and unwatchable.

Tomorrow I’ll go in and do a full-blown Links and catch up on any little things we may have missed. The only major thing that comes to mind is Chris Webber making it official with the Pistons, which makes no sense to me. That and Gilbert and the Wizards turning into AI and the 2003 Sixers. But we’ll figure that out later.

One thought to leave you with: “Winning a championship would complete the whole me.” — Starbury.