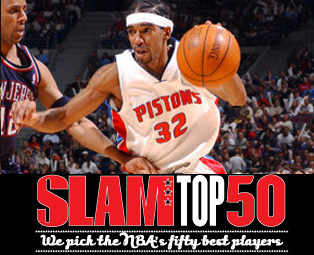 Remember when Jerry Stackhouse was traded for Richard Hamilton? The spin at the time was that the Pistons were only dealing Stack because his contract was coming up for renewal, and that Rip was the best they could get in return. As if the Wizards were getting over on the Pistons. Ha! I may have been a bit biased because at the time I had recently written a story about Rip talking about how overlooked in Washington he was and how he was ready to explode, but I really was confident that the Pistons killed the Wizards in that trade. I’m no Stack hater (far from it, actually), but that dude’s career was heading downhill while Rip’s was just starting.

And sure enough, Rip has gone on to be a centerpiece of one of the League’s top teams; he stays in tip-top shape, works his ass off on both ends of the floor and can score with anyone in the League. On another team, at this point in his development, 28-year-old Rip could average 24 a night, but he’d rather do what it takes to keep the Pistons winning. Just another reason no one would be so quick to trade him this time around.