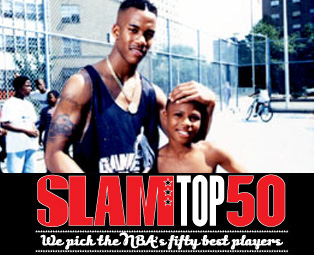 39. Stephon Marbury
by Tony Gervino, former editor-in-chief of SLAM, Inside Stuff and Hoop

Stephon Marbury burst into the gym and began working the room like a Southern politician at a crawfish boil, while his teammates crowded around admiring his shiny new kicks, the likes of which no one had seen before. After hearing the game plan, he immediately began barking orders to his teammates, moving them around the court, like chess pieces with sad, ill-advised tattoos. It was a typical NBA practice on a typical day. Except…

Except that Stephon Marbury was 15 at the time, a sophomore at Brooklyn’s Abraham Lincoln High School and SLAM was a fledgling hoops magazine who showed up at his school for a fashion shoot with his team. And damned if it didn’t come out dope.

So you can understand if we have a soft place in our collective heart for Mr. Marbury. Despite his reputation — and we are not saying it is entirely undeserved — we can look beyond his recent series of unfortunate events and see the beauty in his game and how he has never shied away from the big shots, like so many other NBA players leery of tarnishing their reps.

The fact that his career arc has resembled Tyrone Hill’s forehead is immaterial: We will always have Stephon Marbury’s back because he is family. And family is just like that.