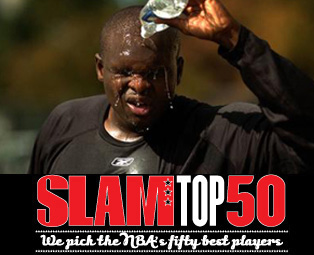 Scottie Pippen has a very deep voice, and he can use it, at times, to make things sound profound. When I spent a couple of hours interviewing him back in his Portland years, in a swanky hotel bar, Pippen said many memorable things. But the most memorable thing he said? The moment when his voice was gravelly bassiest? That’s when looked me square in the eye and pronounced “Zach Randolph works HARD.” He meant HARD. He said Randolph worked as hard as any teammate he had ever had, and well, I think we all know who Scottie played with.

So, look, Randolph deserves some knocks for how he handles his off-court business. Yeah, fine, whatever. No one’s proud of that mess. But please, let’s not confuse poor judgment with poor work ethic. The Blazer training staff confirms it: This man works.

And what does he work on? Conditioning. Weightlifting. Back to the basket stuff. Jumpers. Drop steps. Jab steps. Hooks. Step-backs. Fadeaways. (And, as the joke goes, if there are a few minutes left at the end of all that, he might work occasionally on passing out of the double team.) He gets 18 points per game out of all that, mostly working in the paint against bigger, taller, more athletic players. He’s a bona fide low-post scoring threat, and if your big doesn’t feel like playing tough defense, Zach’s going to make life miserable. He can get to the line, too, having made free throws by the baker’s dozen in more than one game.

These days, he does a lot of that without a lot of jumping. He’s essentially ground bound at the age of 26. Last year, he never even scrounged two blocks in a single game, because he’s still on the long tail of recovery after the devastation of microfracture knee surgery. (Ask Chris Webber, Jason Kidd, or Amare Stoudemire: that knee injury and surgery is like a time machine — it makes you play like you’re 50 hanging around the Y, touting the benefits of “half-court” and zone defense.) But even though at 6-9 Randolph’s shorter than a lot of big men, and he is stapled to the floor nearly all the time, even in his first season recovering from the surgery he was a top-20 rebounder.

How does he do that? The dog that’s in him simply has a strong nose for that ball. His hands just seem too end up where the ball is more than their fair share of the time. Part of that is long arms. Part of that is reading the ball. Part of that is good hands. But a lot of it? It’s just work.