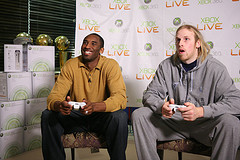 By Sam Rubenstein
It’s becoming a guard and swingman’s league. The center position is on the endangered species list, and today’s dominant big men are explosively quick athletes with versatile games. Talents like Elton Brand.

On the other end of that is the Kaveman. He’s only 23 years old, getting better every year, and last season he was a borderline double double player. He might be the most rugged big man in the west already and he even has a 20-20 game to his name. Elton Brand was getting MVP buzz in part because Kaman was freeing him up by doing his dirty work. When the playoffs came around he wasn’t healthy, and the Clips lost a seven game series to Phoenix. With a healthy Kaman, who knows what would have happened. He’s valuable enough a player to swing a playoff series the other way.
The production as a rebounder, defender, and garbage buckets man is nice, but Chris also brings a little bit of mystique and intimidation. Just look at him. That hair. The glazed look of a neanderthal that’s about to club you over the head and drag you back to his cave for dinner. He’s been everything for the Clippers that #1 overall pick Michael Olowokandi was not. And you wouldn’t catch Kaman getting tazered. He’s probably got a cross bow with armor piercing tazer arrows at home. It’s probably aimed right between your eyes as you’re reading this, right now. Be still.
You can’t even stop him by going below the belt. Reggie Evans is supposed to be a tough guy, but he had to play dirty to get at Kaman. Chris shoved him to the ground, gave him a look of disgust, and walked away. Swagger. Even though his numbers are good and getting better every year, Chris is one of those outside the box score players. He’s critical to the Clipper rennaissance.