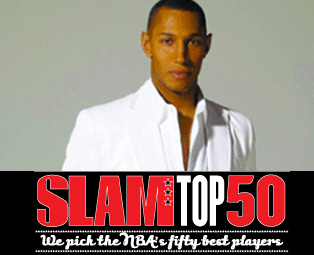 The story goes like this: It was a few days after the 2004-05 season had ended, and Hawks coach Mike Woodson sat down with Hawks guard Boris Diaw for their postseason meeting. It had been a tough year in the ATL. It was Woodson’s first season in charge, and he had a team intent on rebuilding, plus a disgruntled Antoine Walker (is there any other kind?). The Hawks finished the season a dismal 13-69.

Boris Diaw hadn’t had the best of years either. The Hawks had drafted the 6-8 Frenchman 21st overall in the summer of 2003, and had tried using him in every position imaginable — from inbounds specialist to forward to point guard — with no blatant success. Diaw often appeared to be drifting on the court, almost unable to assert himself.

Woodson opened the meeting with some general comments and then said, “For next season, we’d like you to work on your shooting, your…”

Diaw cut him off.

“I can not play for you,” Boris said.

And then he got up and walked out.

Whether that story is true or not, I don’t know, because I haven’t asked Boris about it (yet). But I’ve heard it enough times from enough different people that at least some part of it must be true. Diaw was probably fed up with being misutilized, and he let it be known. By the end of the summer, Diaw was no longer a Hawk, traded to the Suns along with some draft picks for Joe Johnson.

And in the desert, everything turned around for Boris. He was suddenly surrounded by more talent than he’d ever been around in his NBA career, and the kid they affectionately call Bobo flourished. Maybe it was the open Phoenix offense, maybe it was the work Boris put in on his jump shot, maybe it was having the MVP getting him the rock in places he could be succesful.

Whatever happened, Boris Diaw transformed himself from a guy who’d averaged less than 2 made shots per game over his first two seasons into a complete basketball player, able to score, rebound, pass and defend. And at 24 years old, Diaw has nowhere to go but up. And that goes for our list, too.