50 Ways to Leave Your Franchise 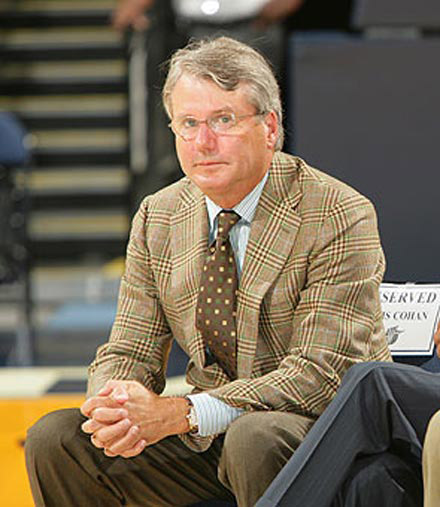 For anybody else it would have been a sad, bizarre ending to a 16-season run as the owner of an NBA franchise. Sources inside the Warriors say that Chris Cohan left without so much as a thank you note, email or other acknowledgment to the Warriors’ staff. He just quietly showed up one day, cleaned out his office and was gone.

But it would be hard to imagine a different ending to the Cohan era.

It wasn’t this way the last time the team’s ownership changed. Cohan took control of the team in 1995 after successful legal maneuvering to oust then-majority owners Dan Finnane and Jim Fitzgerald. When Finnane and Fitzgerald left—despite being forced out against their will—they left thank you notes for the team’s staff. Inside each thank you note was a thank you check.

With Cohan, even a simple goodbye would have been a shock.

To reporters, he was a mystery man, literally running away from the media from the start of his tenure. To the team’s staff he was a quiet enigma, hidden from view yet casting a dark fog over everything. To his own season ticket holders—upset over what they felt was repeated shabby treatment—he was a pariah, and they booed when he was introduced at the 2000 All Star game in Oakland, while his young son stood innocently beside him. Afterward Cohan kept an even lower profile.

Money? Cohan is not known for generosity with associates. He’s sued enough people (including the best man at his wedding), that many Warriors employees cite the threat of a suit as reason not to say a word—good or bad—about him in public or even off the record. Those willing to speak often do so to complain about not getting paid, including former coaches, his season ticket salespeople (who sued and won for unpaid overtime and commissions after the “Believe” season), and perhaps worst of all the Oakland-Alameda County Coliseum Authority. While Oakland struggles with urban blight and long-term budget issues, the Coliseum Authority has had to file lawsuits to collect more than $35 million in back rent and other fees, including more than $10.7 million that a judge recently confirmed remains unpaid.

The team’s new owners have a low bar to clear, and they’re happily hurdling it. They did more press in their first week than Cohan did in 16 years. They’ve mingled with the public. For one night, they cut ticket and concession prices in half. The honeymoon is in full gear, but the real question is whether the team will get better. Signs are mixed.

Co-owner Joe Lacob named his son Kirk, a recent college graduate, as director of basketball operations reporting directly to General Manager Larry Riley. Kirk seems exceedingly decent and gives a strong impression that somebody raised him right, but most teams’ front offices are post-pubescent. Then again, it couldn’t possibly get worse for the Warriors. Could it? Right now, the fear of more of the same is the mastodon in the room.

In a 30-team league where 16 teams annually make the postseason, how likely are the Warriors to go 1 for 16 again?

To find an answer, I called two statisticians, who told me the odds of a team missing the Playoffs that often for 15 or 16 years ranges from 1 in 2000 to 1 in 5000, depending on what is factored into the equation.

“It is highly unlikely this is due to chance,” understated Vadim Bichutskiy, a statistical consultant for companies in nearby Silicon Valley, where Lacob made his fortune. More likely, it’s due to Cohan’s mercurial management and the promotion of executives including Gary St. Jean, Robert Rowell, and Don Nelson. Statistically speaking, the new owners are more likely to be struck by lightning than to continue the near unbroken abject failure of the Cohan era. Being that bad for that long is hard to do when losing earns you lottery picks.

But Cohan has his talents. When it comes to making money, he’s the equivalent of a 7-footer with great hands and agile feet. It cost Cohan $119M when he forced his former business partners to sell him the team, and many at the time thought he had backed himself into an inflated price. But, as in all his other business dealings over the past 35 years, Cohan came out on top – selling the team for a record $450M. He didn’t make many friends in the process, but he did make a killer profit.

At the end of the day, the profits might have been all it boiled down to – because it clearly wasn’t about loyalty or the fans or his legacy or concern for his popularity in his hometown. And if that’s your M.O., you may as well slide quietly out the door once you’ve gotten what you came for.

Game Notes:
—Lou’s Book Club: Warriors forward and avid reader Lou Amundson has agreed to provide ongoing book recommendations throughout the season. His current recommendation is Michael Crichton’s 1999 time travel thriller, Timeline. “It’s a page-turner,” says Amundson. Amundson also says he hopes to be back from the finger injury that has kept him out all season by his birthday, December 7.

—With Amundson and David Lee both out, the Warriors have tried Dorell Wright at the 4, and burly rookie Jeff Adrien is also earning minutes. Adrien was undrafted out of Connecticut but has worked his way into the coaching staff’s good graces with his physical play.

—On Monday Lee met with the media for the first time since his multiple hospitalizations for an infection after catching Wilson Chandler’s tooth in his elbow. The injured elbow was heavily bandaged, while the other elbow had tubes coming out of it where Lee receives regular IV doses of antibiotics. “When you go to the ER and say you have a human bite, they drop everything,” he noted. Lee plans to rejoin the team at the latest for their Nov. 30 home game against San Antonio, and said he may even suit up for limited action late in their upcoming road trip.

—A seemingly healthy Tracy McGrady says he aims to be back at full strength sometime around the 20th game of the season—which would be just in time for a matchup against one of his former teams, the Magic.