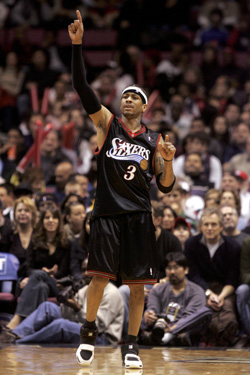 Eleven years. It’s hard to believe, isn’t it? That’s how long we’ve been watching this guy play. In the blink of an eye, Ivey went from the brash, anti-establishment ‘hood superstar who said he didn’t have to respect the Jordans and Barkleys of the mid-to-late 90s, to (gulp!) one of the elder statesmen of the game today.

Wasn’t it just yesterday that he crossed up Mike? Twice?? I remember going to school the next day (it was grade 10 I believe) and spending the entire day talking about the ramifications of the play with my boys. You can find the clip on YouTube today and watch it over and over again, but you can’t come close to re-capturing the magic of that night. Here was a rookie embarrassing the greatest player of all-time (who was just about to win his 5th title of the decade) like it was the most natural thing in the world. Try and guess which move was the most practiced on playgrounds across this continent the following day. Of course David Stern and the No-Fun Police decided to investigate the matter, and before you knew it, “palming” was being called more regularly and hundreds of ankles around the league were spared.

Or how about the magical playoff run in 2001? The 50 point shootouts with Vince were dope, but what really won our hearts was the Bucks series. Remember how dude had to sit out game 3 (due to a tailbone injury), but came back and willed his team to victory in seven brutal games? I’ll never forget game 4 when he took a shot to the mouth and opened up a gash; to avoid being taken out of the game, he kept swallowing the blood, and when that became too much to handle, he simply put his head inside his jersey and let the blood run down his chest. He would not be denied.

The 2001 Finals may not have gone Philly’s way (Kobe and Shaq’s Lakers had other ideas), but A.I. left an indelible mark on them nonetheless. From day 1, everyone figured it was going to be a clean sweep; everyone but Iverson that is. With Tyronn Lue draped ALL over him in game 1, he got loose for 48 points in a performance for the ages, punctuating it with a nasty crossover and deep baseline jumper in Lue’s eye to ice the game. To really drive home his point, he dramatically stepped over a fallen Lue and glared at the Lakers bench, letting them know that he wasn’t going down without a fight. Never that.

Allen Iverson is 31 years old. He’s still one of the greatest players in the game (and shows no signs of slowing down, which in and of itself is unbelievable); his numbers speak for themselves; he’s done with the gangsta lifestyle of his youth (but has fought valiantly and triumphantly to remain true to himself); and now mostly talks about watching his kids grow up. A once in a lifetime talent who became an icon on and off the court, and though he might never win the championship he so desperately wants (especially not in Philly), his career will go down as one of the most unforgettable in the game’s rich history.